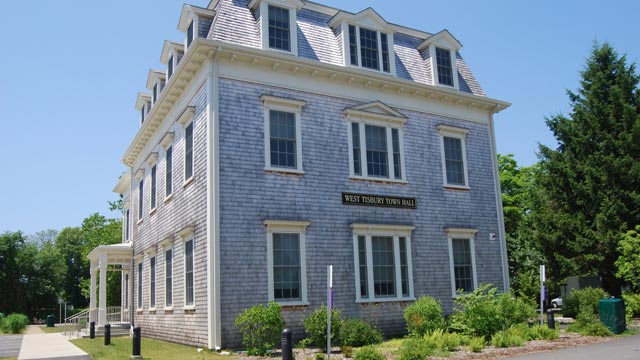 West Tisbury selectmen last week revisited their decision to sign an agreement with Cape and Vineyard Electric Cooperative (CVEC) to allow the co-op to build a photovoltaic array at the town landfill off Old Stage Road.

On December 5, selectmen voted to enter into the agreement to allow CVEC to build the new solar array on six acres of the landfill at no cost to the town and run the facility for 20 years in exchange for tax breaks and incentives from the state.

At the December meeting, selectmen Richard Knabel dissented while raising concerns that the 20-year period was too long and that there was not much flexibility for the town to change terms. He argued that there was a better deal out there for the town.

Although selectmen voted to enter into the contract, they have not yet officially signed the deal. The agreement allows the town to purchase energy from the PV array for around 7 cents a kilowatt-hour to power town buildings and the West Tisbury School.

The town currently pays approximately 12 cents a kilowatt to NSTAR to provide electricity to the town buildings and the school.

In recent weeks, several residents and town officials have echoed Mr. Knabel’s concerns. Earlier this month the town finance committee sent a letter to selectmen asking them to host a discussion about the solar project.

At their regular meeting on February 20, selectmen met with several local renewable energy experts as well as a member of the finance committee to hear their questions and concerns about the CVEC deal.

Chairman Cynthia Mitchell gave a brief summary of the process that led to the selectmen agreeing to the deal with CVEC. She said it wasn’t until last week that selectmen heard any opposition.

“Until last week we had no indication that there was really any sentiment out there — other than Richard [Knabel] — not to go for it,” she said.

Michael Marcus, a resident of Seven Gates and member of the Up-Island School committee, said that he initially voted in favor of the deal when it went before the school committee, but later he had second thoughts.

Mr. Marcus said he was concerned that the deal with CVEC gave the town no control over which developer was chosen to build the solar array. The deal also does not allow the town to sell any excess electricity generated, he said.

He said the deal with CVEC hinges on high valuation of solar renewable energy credits (SRECs), certificates issued by a government agency to a power company that uses environmentally friendly methods to generate electricity.

The credits can be traded and sold on the open market, providing an incentive to companies that produce green power.

Mr. Marcus said SRECs were trading as high as $550 on the open market last June, although their value has dropped to around $206 in Massachusetts, according to a website that tracks such values.

“As the cost of installation comes down, the SREC values have been driven down,” he said. “I am here scratching my head and asking is CVEC going to get the big deal, and will they come back to you and say we need to renegotiate. How are we protected from that type of change order through this process?”

Under the deal with CVEC, the PV array is expected to produce more electricity than the town can use, but the deal does not allow the town to sell that excess energy on the open market.

Instead, the extra energy will go back to other CVEC members through net metering and allow them to purchase more electricity at a lower price. As part of the deal, the town can take over the management of the array, dismantle it, or have someone else manage it after the initial 20-year period.

Mr. Marcus said that so far, CVEC has not actually built any solar projects on the Cape or Islands. He said he wasn’t sure why, exactly, the various projects have been delayed.

“I have heard CVEC has yet to build a project and that deeply concerns me,” he said. “Solar goes up very quickly, solar is not like wind where you need bathometric studies and avian studies and visual impacts for neighbors.”

Mr. Marcus speculated the projects are at a standstill because the SREC values have dropped and are now hard to predict.

Mr. Marcus said the town might be better off borrowing money and building the solar array itself, then drafting a request for proposals to attract the most qualified contractor who will give the best deal to the town.

He cited the solar array project in Aquinnah as an example of a better business model. That project features 200 photovoltaic panels, enough to power all town-owned buildings and streetlights in that town. Vineyard Power developed the solar array with funding from co-op members Lee and Julie Moncton and the Edgartown National Bank, and the South Mountain Company constructed it.

Under that deal, the town of Aquinnah has the option to buy the array after 10 years, instead of the 20-year period stipulated in the CVEC deal. Chilmark is currently exploring a similar deal with Vineyard Power as a partner.

“I’d like to see this a home grown initiative, and I think the lead that Aquinnah and Chilmark are taking, taking control of their destiny, is admirable and a good thing for the Island,” Mr. Marcus said. “I think there’s a better deal to be done and I think you will have more control over it and it will be less of an unwieldy process.”

Richard Andre, a member of Vineyard Power, urged selectmen to reconsider their vote to enter into agreement with CVEC. He said partnering with Vineyard Power would allow the town to own the array after ten years. It would also allow the town to have more control over the RFP process, and give officials final say over choice of developers and design, he said.

“They have not executed one project,” Mr. Andre said, referring to CVEC. “You don’t have the ability to own it [after ten years] and I think there are questions if it will ever be completed. If it isn’t built you will start losing opportunities.”

Finance committee member Gary Montrowl said the project is not a part of the town’s annual operating budget, so technically the finance committee has no fiduciary responsibility to review it.

But he said that finance committee members want to know if the town is getting the best deal with CVEC, especially since the committee may need to get involved in the project when the town takes ownership or the array down the road.

“It came to our attention at the last minute, and that is probably partially our fault…,” he said. “We just want to make sure we examine all the options and if this is in fact the best option for the town — which it might be.

“We don’t want to intercede where we don’t belong, neither do we want to appear derelict in our duties.”

Energy committee member Susan Hruby said the town was already a member of CVEC, and argued that the deal with the co-op made the most sense since they were going to develop the project at no cost to the town.

“Could we have had a competitive bid…?” she asked. “We could have, yes. But look around, this is West Tisbury, we don’t have hordes of staff, particularly the type of staff, qualified staff, to do this sort of thing.”

“With all due respect, West Tisbury is indeed a small town, but how would you characterize Aquinnah?” responded Mr. Knabel.

Mr. Knabel said that he talked with Aquinnah town administrator Adam Wilson, who assured him that this type of project was “entirely manageable” for a small town like Aquinnah or West Tisbury.

Mr. Knabel said he didn’t like entering into a 20-year deal when a 10-year deal with another co-op was possible. “[You can’t] know in the year 2013 what is going to be true in 2033,” he said. “It’s very hard to have a crystal ball when it comes to energy and I think a certain amount of conjecture goes into this, but I think a 10-year deal is much more doable than a 20-year deal.”

Ms. Mitchell said the town negotiated the “best contract” possible through its attorneys, although the town counsel did report that those talks were at times adversarial, difficult, and extremely complicated.

Ms. Mitchell agreed that the town needed to take a second look. She said selectmen should reject the contract if the language of the deal has been altered in any way since they voted to sign it back in December.

Selectman Jeffrey (Skipper) Manter said he worried that waiting might force the town to miss out on other opportunities. “How do we flush that out and see what is causing these delays?” he asked.

Town administrator Jen Rand said that she has already left a message for CVEC officials asking about the delays. Selectmen said they will revisit the issue.