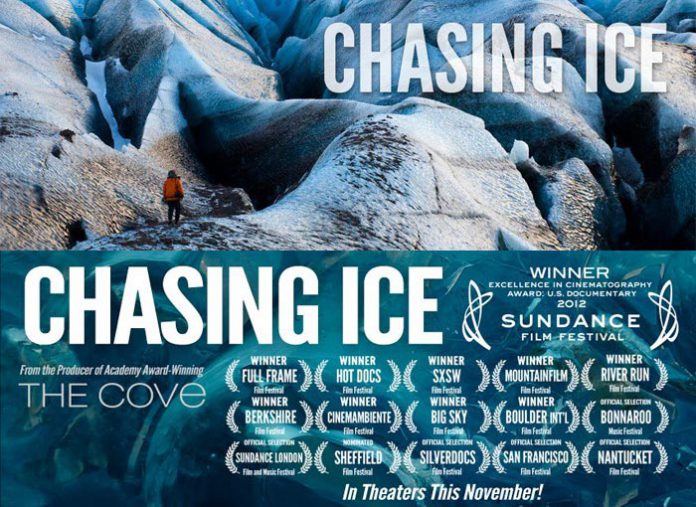 This documentary plays Saturday, April 6, at the Martha’s Vineyard Film Center in Vineyard Haven as part of its Green on Screen series with the Vineyard Conservation Society. Founder and director Richard Paradise announced last Thursday that philanthropist Marilyn Meyerhoff has made a significant donation that will support the film center for years to come. The Film Society will name the film space in its new Vineyard Haven theater in honor of Ms. Meyerhoff, Mr. Paradise said.

Also opening this week at the Film Center are “Samsara” and “Reality.”

Although Mr. Balog began as a skeptic about global warming 20 years ago, the long-time nature photographer became persuaded after providing images for an article on glaciers. In 2007 he started work on a study called the Extreme Ice Survey. Gathering a team of researchers to help him and traveling by helicopter, canoe, and dog sled across Iceland, Greenland, Alaska, and Montana, Mr. Balog set up time-lapse cameras at stationary sites to observe the changes in glaciers at these locations over a three-year period.

The project was inherently dangerous and took a physical toll on the photographer, who underwent four knee surgeries before its completion. The resulting film, directed by Jeff Orlowski, has been called the most comprehensive and authoritative study of glaciers ever made. Hauntingly beautiful shots of Arctic glaciers dissolving are fleshed out with graphs and diagrams. Conservative talk show host Rush Limbaugh, representing the nonbelievers, gets to have his say about global warming as “garbage science.” The striking visuals of “Chasing Ice” suggest otherwise.

Glaciers in Alaska and Montana retreated two and a half miles over the three-year filming and become almost unrecognizable from their original appearance. In the past 10 years, more melting has occurred than in the previous 100 years. Some scientists estimate that hundreds of millions of people will eventually be displaced by the glacial melting caused by global warming.

The film’s most dramatic evidence comes with scenes of the “calving” at Greenland’s Store Glacier. Glacial “calving” occurs when a large chunk of ice breaks off a glacial mass. Members of the “Chasing Ice” film crew camped out at the site in Greenland to capture a 300-foot-high tower of ice breaking off Store Glacier.

“Chasing Ice” won the Best Cinematography Award for Mr. Balog at the 2012 Sundance Festival, and an audience award at the 2012 South by Southwest Festival. Actress Scarlett Johansson performs the theme song “Before My Time.” Composed by J. Ralph, the song was nominated for a 2013 Academy Award.

Remarkably, debate over global warming may continue in some quarters, but “Chasing Ice” offers disheartening and graphic evidence of how rapidly the world’s glaciers are vanishing. The film gives credence to Mr. Balog’s belief that melting glaciers represent the canary in the coalmine for global warming.

The Italian fiction film “Reality” explores an equally frightening vision of the future as “Chasing Ice.” A satire that won the 2012 Grand Jury Prize at Cannes, this film follows the descent into madness of Luciano, a wide-eyed fishmonger who auditions for the real-life, popular Italian reality TV show “Grande Fratello.” It is equivalent to the American version, “Big Brother,” where contestants compete to continue living in a house wired for TV and Internet viewing by the public, until only one of them is left. With Martha’s Vineyard about to acquire its own reality TV show, “Reality” takes on a Fellini-esque sense of the surreal.

Luciano is played by Aniello Arena, a real-life Neapolitan camorrista (gangster) serving a life sentence in prison. Luciano becomes obsessed by his chance to appear on the TV show, losing his wife and children as well as his mind to the fantasy of fame and fortune. Director Matteo Garrone plays with so many kinds of illusions that the viewer’s head may spin, but “Reality” becomes a cautionary tale about reality shows. 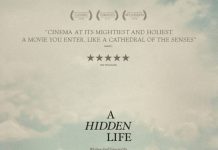 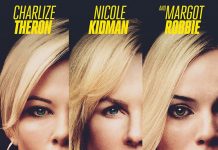 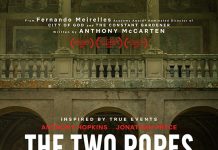 Two powerful leaders contend with each other in ‘The Two Popes’