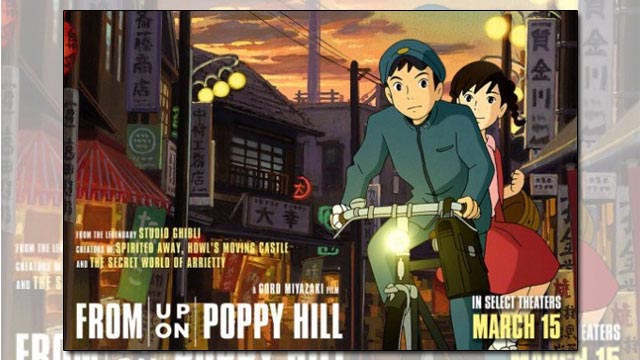 Gorgeous hand-drawn animation highlights “From Up on Poppy Hill,” the Japanese film showing this weekend at the Martha’s Vineyard Film Center. It is a collaboration by Hayao Miyazaki, considered one of Japan’s greatest animators, who co-wrote the script with Keiko Niwa, and his son, Garo Miyazaki, who directed.

The plot does not incorporate fantastical creatures and events like so many of Hayao Miyazaki’s best-known movies (“Princess Mononoke”; “Howl’s Moving Castle,” which was nominated for an Oscar in 2006; and “Spirited Away,” which won a Best Animation Oscar in 2003). Mr. Miyazaki refused to attend the Oscar ceremony that year because of the U.S. invasion of Iraq.

Instead, “From Up on Poppy Hill” takes as its setting real-life Yokohama in 1963, when Japan is preparing for the 1964 Tokyo Olympics. Umi, voiced in the American version by Sarah Bolger, is a teenaged schoolgirl who runs the family boarding house in the absence of her parents. Although her grandmother lives with her and her two siblings, Umi’s father was lost at sea during the Korean War, and her mother is away studying in the U.S.

Every day Umi raises nautical flags in the backyard of the family home, high on a hill overlooking Yokohama Bay where ships pass. She sends the signals in the hope that her father will somehow see them and mysteriously gets answers. That is the closest the movie gets to fantasy.

Umi’s loneliness and continuing grief at the loss of her father become almost palpable in the lushness of her beautifully drawn surroundings. This young girl reflects the hardworking ethic of Japanese children of the era; she carries with seeming ease a heavy load of responsibilities, cooking all the meals for the family as well as keeping up with her schoolwork.

Umi strikes up a friendship with Shun (voiced by Anton Yelchin), who attends her school and works on the newspaper put out in the Latin Quarter, the boy’s clubhouse for extracurricular activities. Through Shun, Umi gets involved in the Latin Quarter and meets a number of the other boys who hang out in the dilapidated old building that houses their various clubs.

Colorful flags hang from the maze of railings in the Latin Quarter’s high-ceilinged interior, where warm, non-fluorescent light spills down from a cupola, but the clubhouse is basically a cluttered mess. Umi brings her girlfriends, and they give the building a thorough, Japanese-style cleaning.

Viewers may recognize the well-known Hollywood actors who voice the characters — based on a 1980 manga by Tetsura Sayama — in Umi’s and Shun’s lives: Gillian Anderson as Miki; Jamie Lee Curtis as Ryoko; Bruce Dern as Onodera; Ron Howard as the Philosophy Club president; Chris Noth as Akio.

Because of upcoming preparations for the Olympics, school administrators decide the Latin Quarter should be demolished. But after an unsuccessful appeal to these adults, Umi and Shun take matters into their own hands. They make a trip to Tokyo for a desperate last try to save the building. Meanwhile, as their romance flowers, Shun learns shocking news about his father.

The younger Mr. Miyazaki says he rejected a photo-realistic style and opted for re-creating a world as it is seen by his characters, according to a recent N.Y. Times interview with the filmmaker. The pleasures of “From Up on Poppy Hill,” which became Japan’s top box-office success when released there in 2011, are quiet ones, based on a Japan of almost 50 years ago, when life seems simpler and perhaps purer, less industrialized and less commercial. Both adults and children will enjoy “From Up on Poppy Hill.”

For more information including more showtimes and films, visit mvfilmsociety.com.