“I don’t know how we decide what we love,” Ms. Kinsman said. “There are certain things most people love and pie is mine. I do love good food and flakey buttery crusts.”

Her favorite pie, at the moment, is a peach, raspberry, ginger crumble. Her preference changes with the seasons, but pumpkin is, by far, her all-time favorite.

Soon after Ms. Kinsman first began thinking of going into business, the parts began to come together rather quickly. Last November she was thinking about making a career change after seven years at The FARM Institute (TFI), when she said to her husband, carpenter Drew Kinsman, “Wouldn’t it be fun to make pies for a living?”

When her husband came home from work the next day, he said that Bob Skydell of Fiddlehead Farm, with whom he had been working, said that she might be able to use a kitchen he had been renting for baking and catering, the space that had previously been the bakery of Liz Kane’s Cakes by Liz.

That same week she saw a classified ad listing for another commercial kitchen for rent, the former home of Rickard’s Bakery in Vineyard Haven. “This is weird,” she said, “all these kitchens. You have to be careful what you say out loud.”

She decided the Rickard’s spot was too big for her startup venture, but she did buy some of his equipment, as well as some of Mr. Skydell’s. “It was all really good timing,” she said.

“Between January and March I just kept putting one foot in front of the other, kind of tiptoeing towards the idea, then backing away, and it all came together rather smoothly,” she said.

She will sell her goods at Fiddlehead Farm and has several other locations in her sights. Now that her bakery is together, she expects her permits and licenses to be in place within the week and she intends to seek out other retail outlets for her creations.

One of her objectives is to start a pie club that will provide members with a pie of the week for a set fee. Zoning restrictions do not permit her to sell retail from her bakery.

Her most recent work experience was as business manager for more than five years and development director for the last year and a half at TFI, but at home she would occasionally bake pies for herself and friends. One of her newest creations was the result of request for a pie from a friend. At the last minute she said the only ingredients she had that might work became a cherry-pear crumble. It was a hit, she said.

The 39-year-old Ohio-born baker earned a degree in finance from Ohio State University. Out of college she worked for a trucking company handling transportation and logistics. She arrived on the Island in 2000.

Ms. Kinsman has baking experience. She baked in 2003 at Back Alley’s, behind Alley’s General Store in West Tisbury, and was the morning baker at the Shiretown Inn during their 2004-2005 summer seasons baking scones, muffins, and cookies.

Her plans include seasonal pie menus, with pear-cherry, pear-cranberry-ginger, four berry, apple, and sweet potato as well as the traditional pumpkin and squash pies in the fall. She will have wild huckleberry and blueberry pies later in the summer if she can get enough picking help. She also wants to make muffins, coffee cake, and quiches, and a line of smaller, five-inch pies called Sweetie Pies and even smaller, bite-sized ones called Cutie Pies.

“I hate to waste anything. I make dog bites from the leftover dough, re-rolled,” she said. “They are kind of tough, but dogs seem to like them.”

All of her pies are made from scratch. Her plan is to pre-make the crusts the night before so she can come in and assemble the pies in the morning. She said that freshness is important even thought she admits that some pies taste better with a little aging.

Her new bakery is in a rather small basement room with a big glass door that admits rashers of light on sunny days. Last week as she was standing in the doorway, in her floury baker’s apron, a blue kerchief wrapped tightly around her head, she recalled the scenes and smells from the kitchen as her grandmother baked pies back in Ohio when she was young.

“My mom taught me how to make pie when I was about 10,” she said. “There was something magical about the process, how you work the dough and how you don’t over-work the dough and the way it all came together, just this crispy, flaky…I don’t know, it spoke to me.”

Stella Salumeria brings the North End to the Island 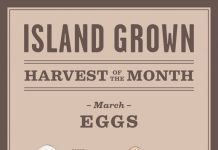 Harvest of the Month: Eggs