The lilacs are in bloom just in time for Memorial Day. Their appearance and smell forever triggers the memory of the annual Edgartown School March to the Sea. As a child, I remember selecting the perfect blossoms with such reverence, my mom wrapping the stems in wet paper towels, then foil, so the blooms would not die in my cubby at school as we passed the morning in anticipation of the afternoon’s ceremony.

The tradition continues on Friday, May 24, the students of the Edgartown School parade from the school through town to Memorial Wharf, then share a short ceremony before throwing flowers for the departed off the dock. The students leave the elementary school at 1 in the afternoon. This time-honored town tradition is not to be missed. I’m always good for a tear or two at this one.

A highly entertaining impromptu Jaws appreciation party fell together this past weekend at the Shanty, when several of us went upstairs to watch the Preakness. The Shanty had a projection screen set up showing Jaws on repeat, and enjoying the film for the umpteenth time at the table next to us, we got to talking to Michele Smilek and Tim Houlihan from Oak Ridge, New Jersey. As is bound to happen, the E-towners among us began relaying stories of our connections to the movie and the people in it — my mother recounted the day they filmed the big Fourth of July parade scene, and my then three-year-old brother disappeared into the crowd much to my mother’s dismay.

Then, of course, we all anticipated the crowd-favorite “fake fin” scene, featuring the Searle boys. I mentioned to our new-found Jersey pals that Jeff Voorhees, who in his portrayal of Alex Kintner met his tragic end on that ill-fated yellow raft, works around the corner at the Wharf. Well, lo and behold, Jeff had the afternoon off and graced us all with a celebrity appearance. You’d have thought Elvis had entered the building the way Jeff was lauded, signing autographs and talking to fans. Then his actual scene came on the big screen, greeted by a bar full of people yelling “Swim, Alex! Swim!” It really was a great moment to witness. Even made up for the fact that I picked the wrong pony in the horse race.

Happy anniversary to Chip and Colleen Seadale who celebrate a milestone 30 years of marriage on May 28. Pearls are the traditional 30 year gift, so go out for oysters, maybe?

Don’t miss the Friends of Family Planning Annual Art Show Benefit and Sale, which begins with the Gala Opening Preview Party on Thursday, May 23, 2013 from 6 to 8 pm at the Ag Hall, with the sale continuing through Memorial Day Weekend. This event supports the Family Planning Clinic of Martha’s Vineyard, which provides reproductive health and family planning services to our community. This event not only showcases incredible art, but is a prime example of how our island community supports our own. Artists donate from 40 to 100 percent of their proceeds to the cause, local restaurants, caterers, and private chefs are donating appetizers and dessert, and volunteers staff both the show and the kitchen. For more information, please call 508-696-0459 or go to friendsoffamilyplanning.org.

The Martha’s Vineyard Museum announces a new exhibit, taking visitors on a trip back in time to far regions of the world. A Taste for the Exotic: Mementos from Around the Globe, opening May 24, explores the different geographic regions visited by Vineyard mariners in the 19th and early 20th centuries. The objects they brought home serve as documents of encounter, but also documents of cultures irrevocably changed by sailing and whaling. A Taste for the Exotic will focus on three regions of the world where Vineyarders ventured: East Asia, the Pacific Islands, and the Far North. For more information, visit mvmuseum.org.

Warning party people: May 27 is Eliza Dolby’s birthday, which is generally observed for the three days leading up to and following that date. Not if, but WHEN you see Liza out and about, wish her a good one. Sharing the May 27 spot is Denise Solomon, who will happily be back on Vineyard soil just in time for her big day.

On this Memorial Day, I say to those who have served and continue to serve, and to those who have made the ultimate sacrifice, thank you. As I drive around town seeing the lilacs bobbing on their stems like so many purple hearts, I will think of you. 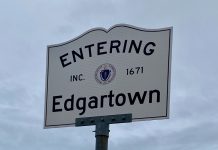