As is the case with many naturalists, my fascination with wildlife started with birds, which, in addition to being colorful and active, have the advantage of being easy for a beginner to find and observe. Over the years, my interests have steadily expanded to include less obvious animals, things like butterflies and dragonflies that are much smaller than birds and often harder to locate.

But the added effort and attention needed to find insects turns out to be amply rewarded by the gem-like coloration and fascinating behavior many of them display. They may be small and inclined to hide, but insects are fully equal to birds as quarry for the careful observer.

Exhibit A might be the tiger-beetles, a relatively small and highly specialized group of predatory insects associated with open habitats. Only about seven species occur on the Vineyard (more than 100 species can be found in the continental U.S., though many of them are quite restricted in their range or their habitat preference). But several of our tiger-beetles are abundant, easy to find, colorful, and fascinating to watch; adult tiger-beetles are rapacious predators, active during the day and easy to spot (for an insect) because of their preference for bare ground.

Three of our tiger-beetles frequent shorelines — open, sandy beaches in the case of the hairy-necked tiger-beetle and the northeaster beach tiger-beetle, and muddier shorelines (like those of our Great Ponds) in the case of the common shore tiger-beetle. But to find the greatest variety and the most attractive species, you’d want to visit open, dry areas in the Vineyard’s interior: at this point in the season, the fire lanes of Correllus State Forest are loaded with these little monsters.

About a half-inch long, tiger-beetles are most easily located by making them fly. Simply walk slowly along a sandy stretch of fire lane. A variety of insects, including flies, wasps, and other sorts of beetles, will flush; tiger-beetles will register as relatively slow-flying insects, heading away from you in a sinuous flight path usually below waist height. They typically land in 20 or 30 feet, close enough so you can mark their landing point and then approach more carefully. Binoculars, preferably ones that will focus on objects as close as six or eight feet away, are almost essential for finding and observing these insects. But once you’ve got one located, careful stalking will often get you within inches of it.

One of the most common tiger-beetles in this setting is the six-spotted tiger-beetle, which is a striking iridescent green in color. Less numerous is the purple tiger-beetle, accurately described by its name. But the most plentiful of all is the oblique-lined tiger-beetle, black with an elaborate pattern of white markings on its back. The top of its abdomen, hidden by its wings when at rest, is iridescent green, and this is often visible when the insect is in flight. Later in the year, these species will disappear, but a smaller, drabber relative, the punctured tiger-beetle, becomes common. Smaller numbers of the spring species can often be found again in late summer.

Patrolling actively on the ground, and attacking with a blindingly fast dash like their mammalian namesake, adult tiger-beetles of all kinds will capture and eat any kind of insect they can catch. Tiger-beetles, atop long, slender legs, are said to be among the fastest runners in nature, in terms of their speed relative to their body size. The impression one creates as it rushes its prey is of instantaneous relocation: suddenly the beetle you’re watching is in a different place, crunching a smaller insect in its jaws.

For all the beauty and accessibility of the adults, larval tiger-beetles are homely and secretive. They spend anywhere from a year to several years, depending on species, maturing in their burrows, lurking near the entrance to bushwhack insects that chance to pass nearby. Right now, in areas where adult tiger-beetles are plentiful, larval burrows are, too; the holes are about an eight of an inch in diameter, surrounded by neat piles of sand much like an ant-hill.

Serving as prey as well as predators, tiger-beetles are eaten by arthropod predators such as wolf spiders, and their fondness for life in wide-open spaces makes them vulnerable to predation by birds, as well. Some species of flies are “parasitoids” on tiger-beetles: a female fly, dodging the jaws of the larval tiger-beetle, lays eggs in the burrow, and the fly larva that hatch climbs onto and eventually consumes the beetle larva.

I love to imagine life from a tiger-beetle’s perspective: what we think of as sand must feel like large cobble-stones under foot, and these insects are incredibly deft as their six legs negotiate what is, for the beetle, a vast expanse of this shifting surface. Aristocratic and highly evolved, a tiger-beetle has the style of a cheetah on an African plain or a falcon in the air — only smaller. 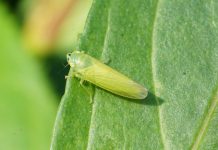