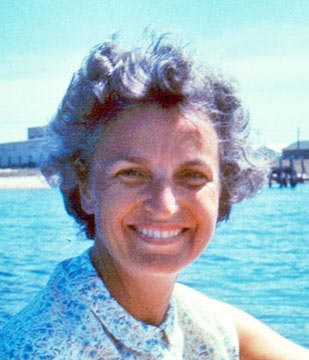 Marian “Marnie” Warner Trotter, 95, of Charlottesville died on Wednesday May 29 at Westminster Canterbury of the Blue Ridge. She was a summer resident of Tisbury.

Born on September 21, 1917 in Wilmington, Delaware, she was the daughter of the late Irving and Marian Tallman Warner. She was the fourth of their five children.

A 1939 graduate of Bennington College in Vermont with a Bachelors Degree in Music, Marnie continued to delight in and perform music throughout her life — singing in choirs, producing Christmas pageants, playing piano and harpsichord, and even teaching her self-described tone-deaf husband how to play the recorder. Writing poetry, sailing, gardening, and keeping a journal for over 60 years also nourished her artistic and deeply spiritual soul.

At the heart of her married life was a commitment to her husband’s ordained ministry in the Episcopal Church, from their early parish life in Amherst, Massachusetts, to the Virginia Theological Seminary where they resided from 1946 through 1977, as Jesse served on the faculty and as Dean. Marnie’s strong and gracious presence pervaded Seminary life with her care for the entire Seminary community of faculty and students, their spouses, and families. Her hospitable welcome continually nourished the Seminary’s missionary spirit and purpose.

Marnie’s deep love for her four children and her tireless devotion to making a good and stable home for her family were expressions of how valuable motherhood was to her, and of the joy it brought. That love, however, was to bring some of her darkest days. With the ability to steady those around her, she stood by her children in the wake of tragedy: the death of her son John, and the illness of her son Bill. These experiences deepened her concern for the welfare of others, especially in regard to the mentally ill, for whom she served as advocate for many years.

During a period of many shifts within the institutional church, Marnie’s faithfulness guided her through the struggles of change, as she served as senior warden on her parish vestry, participated in a continuing prayer group of 20 years, joined Church of the Savior and its Wellspring Mission group and was ahead of her time with her interests in environmental preservation, solar energy, simple living, and society’s changing roles and expectations.

As a wonderfully gregarious person, Marnie delighted in the residents and staff at Westminster Canterbury of the Blue Ridge, in Charlottesville, Virginia, where she moved at the age of 76. On the premises, she designed and created a garden.

During the years she was able to drive, her affection and care extended to Emmanuel Church, Greenwood, and to a wide range of friends in the area. In her most recent years Marnie was particularly grateful for her dear friend, spiritual confident and advocate, Charles Chabot; long-time friend the Rev. Mary Hansley, who is transcribing her journals; and her personal attendant CAN Rose Cato.

Marnie is survived by a daughter, Marian Warner Trotter; two sons: William Pusey Trotter and Thomas Tallman Trotter; and a grandson, Alexander Thomas Trotter. She was preceded in death by her husband, Jesse McLane Trotter; her son John McLane Trotter; and her four siblings.

In lieu of flowers at both services, Marian Trotter would like her family and friends to consider memorial gifts in her name to go into the funds supporting the Jesse Trotter Visiting Professorship, Virginia Theological Seminary, 3737 Seminary Road, Alexandria, VA 22304 or the National Alliance on Mental Illness (NAMI), P. O. Box 62596, Baltimore, MD 21264-2596.

Friends may send condolences to the family at www.hillandwood.com.