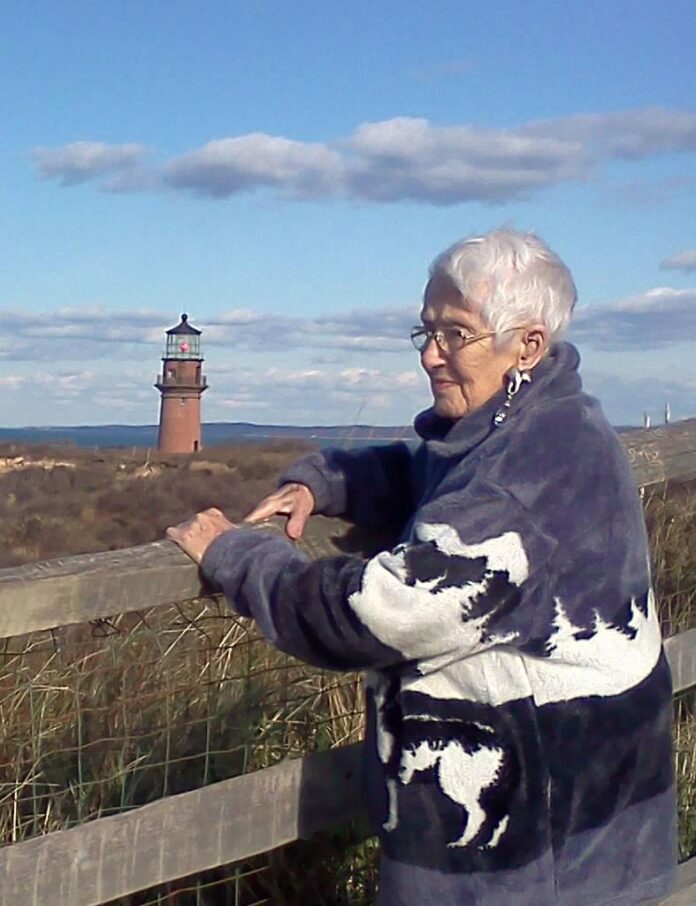 Mildred “Millie” D. Briggs of Vineyard Haven, a former winter resident of Jensen Beach, Fla., died peacefully at home on May 26 with her daughter, Jo, by her side. She was 98.

Born August 31, 1914, in Somerville, she was the daughter of the late Archie G. and Josie M. Dow LaBelle. She moved to the Island at the age of five. Her father was to be a baker at the Pawnee House. Most of her early years were spent on the Vineyard in and around the family’s restaurants, hotels, and bakery. One of three sisters, she was fondly referred to as one of “the LaBelle girls.”

She graduated from M.V. class of ’31 salutatorian at age 15 and was crowned Miss Martha’s Vineyard that year. Working as a waitress in the summers she learned the trade well but wanted more. Millie enrolled in Burdett Business college, finishing the two-year course in one and graduated sigma chi omega.

Millie started her career as a secretary. She worked for the Hoover company for five years, then the Bridgeport Brass Company. Seeing no future there, she went to the Hale Dorr law firm and eventually became secretary to the president at H.P. Hood & Sons in Boston. There she ran the secretarial pool, handling income taxes, trusts, etc. It was ‘H.P.’ that taught her how to be a “good boss.” Convincing them to give her long weekends instead of a vacation, the Vineyard waters became her favorite place. Here she sailed her 18-foot sloop and met Ralph Briggs. She was the damsel in distress and he rowed over from his boat to rescue her — for the next 45 years.

In 1946 they opened a little ice cream and sandwich shop on Circuit Ave., Oak Bluffs, called Frosty Cottage. People still fondly reminisce about the whiffle burgers they continue to make today. Ralph and Millie also bought the Island House Hotel next door from the family, and ran that plus The Shipwrecked Troll restaurant within it and a catering business out the back. Hundreds of cream-puff swans, elegant wedding cakes: she did it all! They saw many an Island wedding.

Being a summer business, in the winter they would go to ski country. There they ran a warming hut at Intervale, N.H., and later a Mt. Cranmore, North Conway, N.H. Aaah…the famous cinnamon buns and hot chocolate.

During the long winter months up north, Millie started to paint watercolors. It would become her lifelong passion. She attended the very first All Island Art Show at the Tabernacle in 1952, and never missed a show the rest of her years. She became one of the last crowned “Island treasures,” and was very proud to wear the badge.

In 1953 the Briggses bought property on Beach Road in Vineyard Haven and Millie had her first one woman show. Eventually the location would house the first manufacturing business on the Island. A cottage industry unto it’s self, Woodchips, became a place of memories and employment for many Islanders. Santa rowing out front was a happy destination at Christmas. They started it as a gift shop, featuring Millie’s paintings, handcrafted wood items, and her homemade gingerbread houses. The hospitality table served their famous whale ale hot orange cranberry tea and Ralph’s cheese balls. The recipe was hers, but he did all the grinding! These got shipped all over.

They worked as a team, Millie dreaming up and designing items for the gift trade and Ralph making it happen. Woodchips Designers grew to a wholesale gift manufacturing company making housewares, potholders, etc., and cross-stitch embroidery kits. Millie and company traveled to six major cities twice a year to sell at gift shows. They worked hard but enjoyed being there, taking in the latest Broadway shows and experiencing the best fine dining. Selling to gift and speciality catalogs put the business on the map.

Sales were great, but they were working too hard. Florida was looking good and they started the summer/winter trek.

They sold the business in 1975 to the Browns but kept the property. Millie “retired” and focused her talents completely toward her art. Never happy to just have a hobby, it became full-time “business.” Together they opened the Beach Road Gallerie. Ralph called it her lemonade stand. Wether you went for the art, or the food, the openings were memorable. It was an exciting day when a large tee-shirt company contracted for her designs. At one time it was estimated that around 33,000 people were walking around the US wearing Millie Briggs tee-shirts.

Winters were spent studying with famous watercolorists in workshops around the world. Continually evolving her style, she shared and taught all she learned with fellow members of the Martin County Art Association in Florida. Summers she showed the works and taught innumerable students, conducting her own workshops in Monet’s Garden in France, as well as the Nathan Mayhew Seminars in Vineyard Haven. She also got a grant to teach seniors from the Tisbury Art Council.

In 1997 the sign changed to read “All Things Millie Briggs Gallerie Semi-retired: open when I’m here.” She lived on the property and never turned anyone away. When her little white convertible was in the driveway, she was open. She formally closed the Gallerie and the space was rented to “All Things Oriental.” Now, she could devote her time to travel and workshops. Her international painting trips have been featured in travel sections of 200 newspapers across the United States. Travel abroad included England, France, Holland, Switzerland, Ireland, Italy, Greece, Portugal, Morocco, Spain, Hawaii, Tahiti, Jamaica, The Bahamas, several spots in Mexico, and numerous destinations in the U.S.

Often referring to herself as a “workshop junkie,” these trips always involved study with top teachers, such as Caesar Cirigliano, Robert E. Wood, Irving Shapiro, Nita Engle, Charles Reid, and Ray Ellis. You might also have seen her on the bleachers at Wimbledon, or having tea with the Princes Marie Blanche de Broglie at the Cordon Bleu cooking school in Paris. Did you happen to catch the watercolor demo aboard the QE2?

With the Gallerie closed, she began selling out of the trunk of her car with about six others in the parking lot at the Grange. This would eventually become The Vineyard Artisans, run by Andrea Rogers. As the space grew Jo and Glen became her right arm, setting up booths or tents there and at the Chilmark Flea Market. At one point in time she was doing four shows a week, at the age of 90 something!

She always insisted on keeping her art affordable. She wanted everyone to be able to appreciate the art world and got the biggest thrill selling small paintings to kids. She painted in watercolors, oils, pastels, and on porcelain, and fabric to make into pillows. She had many devoted fans, and her Island land and seascapes brightened many a wall.

In her spare time she wrote two illustrated cookbooks and started a third. That one she decided she probably wouldn’t have time to complete, so she published it anyway as a cook “booklet.”

In her early years when not doing “business,” she loved to sail and play golf. Later, in her sixties, she started playing tennis, and she was an avid duplicate bridge player. Millie loved to fish and would go out on deep sea charters, fish the Vineyard derby, and really enjoyed taking her grandsons out to catch baby blues off the first bridge.

Millie never could sit still and just relax: she always had to be doing something.

Millie was predeceased by husband, Ralph E. Briggs, and her sisters, Beverly Andrews and Eleanor Taylor. She is survived by her daughter, Jo Anne Briggs, and her spouse, Glen; her son, Peter Briggs, and his spouse, Patricia; her grandsons Knolls Ward and Jesse Ward and Jesse’s fiancée, Serena Pagliuca, Peter J. Briggs and his wife, Tracy; granddaughters Jennifer and Kimberly Briggs, and Michelle Hardaway; and four great grandsons. A special thanks goes to Sarah and Patrick Nash for their exceptional love and care.

In the words of her best friend, Isabel, “she was kind, generous, loving, funny, and warm. Millie Briggs loved every single adventure that life had to offer.” A celebration of her life will be held at a later date in August, to be announced.