Coop de Ville in Oak Bluffs raised more than $900 at their second annual Chicken Wing Eating Contest, a benefit this year for Eli Bonnell, who had a serious skiing accident this past winter.

Thirteen contestants signed up to take part in the contest, which was sponsored by Pabst Blue Ribbon and Heineken USA. Broken up into two groups, each contestant was given a bowl of 40 yummy looking chicken wings, but the challenge was to eat them in eight minutes. It’s fair to say the wings began looking less than yummy to the contestants as the minutes ticked on.

A large and encouraging crowd gathered around the competitors, who competed at a long table next to Coop de Ville. Judges Tina Conroy and Jen Ward were charged with making sure there was no foul play, like discretely slipping wings under the table, or into a competitor’s bowl, or throwing half-eaten wings into the discard tray. And of course, regurgitating was a definite no-no. At the end of it all, Paul Menton and Cody Brewer were the winners.

Mr. Bonnell and members of his family were on hand to lend support. He spoke to The Times about his accident: Skiing in Aspen last winter, his first time there, he knew he was in trouble when another skier cut in front of him. His skis released, and he was flung into the woods. He was taken to the local hospital and treated for eight broken ribs and a cracked sternum. To make matters worse, he was in the midst of changing insurance policies and was covered by neither. Although he will make a full recovery, he is still unable to work at his trade, lobstering.

Austin Higgins of the Coop organized the event. 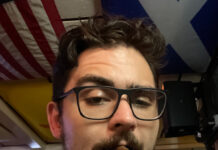 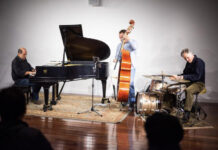 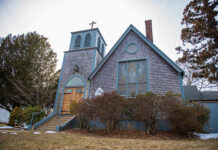