Brian Hall is not even Portuguese. But he sure knows how to make a good sopa, the traditional soup of the P-A Club’s Feast of the Holy Ghost, held this weekend in Oak Bluffs. Mr. Hall, a 2002 graduate of Martha’s Vineyard Regional High School, says he learned from the best of the best.

Mr. Hall is gliding a knife through a tender slab of beef when I arrive mid-afternoon on Saturday, and his buddies Dylan Estrella and Bill Munson are sharing in the prep work.

“We start off the sopa with just the water, beef, and boullion, and boil that together. Then we cut that up and put the little chunks into the rest of it, once its cooked.”

He shows me the stock, cooking outside in a “coffin” – a 250-gallon drum with turkey fryolators underneath.

“Right now this is just potatoes, onions, tomatoes, beef boullion, garlic. Once this is out, we’ll put in the linguica and chourizo and boil that for another hour.”

“We started at 7am this morning, and we hope to get out of here around 11 tonight. Then we have to be back here around 3 am doing the next batch. ”

“This year we’re going for an original style sopa, which is what Queen Isabella actually gave to the sick and dying, the starving people of the Azores. Sopa is different from kale soup, but they are similar, so eventually the kale got added in and that’s what we usually serve at the feast. But this year we’re not using kale. Tricia Bergeron, our president, wanted us to get more traditional. It’s the same recipe, minus the kale.

“Dylan [Estrella’s] father used to make the soup, but I’m on the [P-A Club] board, and two years ago I got suckered into coming and doing this because the old timers that used to do it — Paul and Barbara Humber and Lani and The Chief — needed younger staff to take over. This is my and Dylan’s first year as the main chefs. [joking] It’s scary. They’re big shoes to fill. We’re thankful for them teaching us and we’re trying not to let them down. ”

“We’re expecting to feed as many people who want to come today for about $6 a bowl, and then tomorrow we give everything away for free, in honor of Queen Isabella. It’s a favorite, so a lot of people will come in and get it for sure.”

“What’s it like trying to cook in this weather?” I ask him.

“[sarcastically] It’s lovely, I’m really enjoying it. But we have the tent to keep us shaded and then tomorrow we hope to have everything done before the sun comes up.”

“It’s giving back to the community that gives so much. All my parents’ friends and all my friends’ parents, people I grew up with, they’ve all been involved with it , so I wanted to get into it. Four years ago I got on the board of directors. They needed a young person to step in and help out with the Feast. ”

“The feast reminds me of my childhood, showing up here and going out back to the game booth…it just sparks memories of growing up. It’s always been the thing to do, you go check out the shark tournament during the day and then come to the PA club and get wild at night.”

We’d share Brian and Dylan’s recipe, but it called for hundreds of pounds of potatoes and onions, and we opted not to do the math and make it useful for a family. But we’d love to hear your favorite sopa-making tips. Send them to calendar@mvtimes.com. 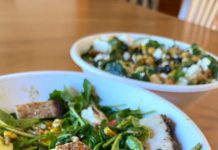 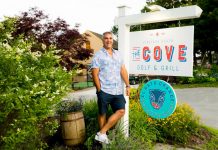 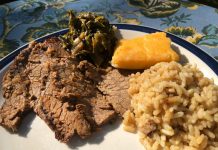