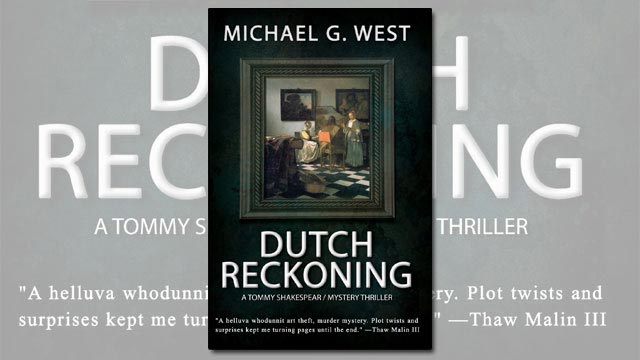 You may begin humming the lyrics to “That’s Life” as you read the bio notes to “Dutch Reckoning,” Michael G. West’s first published novel.

The longtime Island resident lists a panoramic range of career choices, from dishwasher to college professor and corporate consultant, a career diversely reminiscent of the Frank Sinatra 60s standard.

Mr. West has not been “a puppet, a pauper, a pirate, a poet, a pawn, and a king,” but he is a poet and has put several other skills to work in this introductory book of a whodunit series, starring Tommy Shakespear (no “e”), a sort of well-bred former Bostonian living indolently in Santa Cruz. Tommy falls into the gumshoe business largely because he needs the money and he has nothing else to do.

The result is a well-written, terrific read that combines dexterous prose, crisp dialog, and an interesting take on a real-life whodunit, the 1990 theft of nearly $600 million in world-class art from the Isabella Stewart Gardner Museum in Boston.

The still-unsolved caper (the feds say they know who did it but ain’t sayin’) has produced an endless stream of explanations from every wiseguy wannabee from here to Chelsea. Mr. West’s version is as good as any, and way more exciting. After all, he was a colleague-in-poetry and close friend to the late Isabella “Belle” Gardner, poet, niece, and namesake of the woman who built the Gardner.

The book’s museum is called the Beatrice Butler Museum from which 13 Rembrandts, Vermeers, et al were clipped by robbers dressed as cops two years before. Mr. West does not tell us the year in which his novel is set, but he buries enough clues for the discerning reader to put it two years after the Gardner heist.

Mr. West has crafted Tommy’s persona very differently from the run-of-the-mill ex-cop, ex-drunk, always-a-loner PI character. Tommy is socialized, particularly with the ladies, and this reader wondered whether Tommy would be brained by a jealous husband before the bad guys got their chance to settle his hash.

Now Tommy isn’t dumb. He’s smart enough to know trouble when he sees it, but he just can’t seem to stay away from it. Mr. West crafts a plausible background for his Renaissance man PI and he introduces several unique characters that we suspect will be mainstays in future Tommy Shakespear episodes, including Shiva, a video game creator and sort-of girlfriend; and Hank Greenberg, his Red Sox-obsessed lawyer. Tommy had done some investigative work for Greenberg, which helped land him this gig.

Tommy was born in upscale Lexington and was trained to box by his father and grandfather, who had made a fortune in the sporting goods business. Tommy evidenced an early bent for trouble and found all he wanted as a teenager roaming Boston’s downscale neighborhoods.

But life was good. Grandpa had set up a $5 million trust fund for the kids, provided they didn’t drink, smoke, or drug. But on one golden Vineyard summer, Tommy found himself in the company of the Vineyard’s finest while in possession of a pound of pot.

The family made the problem go away, but the trust fund went with it. One thing led to another for several years until Tommy answered the door in his Santa Cruz shack to a lawyer for the Butler museum with a proposition: help us find the art and we’ll pay you a snappy retainer and expenses.

There are multiple reasons for his selection, which even Tommy regards as a shaky decision, and they unfold with the story. Tommy finds himself in Boston, where his hotel room is burgled, then in Barcelona, where his body is beaten, and back in Santa Cruz, where he is shot at in his quest to uncover the truth.

Tommy has some Inspector Clouseau in him. As he peels the onion, murders begin to pile up and he finds himself a prime suspect, on the run from both the bad guys and the good guys.

Mr. West has concocted an offbeat, spicy tale full of memorable characters and several hilarious episodes, including a spoofy chase scene involving Tommy and a car-full of Mexican day-laborers he’s recruited as a cover.

Tommy, like his creator, has knowledge of arts and food and they are detailed along the way. Did you know, for example, that Vermeer never signed his work the same way twice or that you can make an edible paste from ganga? Neither did I.

Mr. West is a poet of note on the Island who uses that eye to describe details of everyday life that add to the reader’s connectivity with the characters and the scenes.

This book has legs. It would appear Mr. West can retire from drywalling and dishwashing and pursue his real calling. His next novel, “XOC-The White Shark Murders,” set on Martha’s Vineyard and environs, is due out shortly. 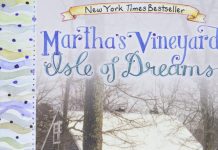