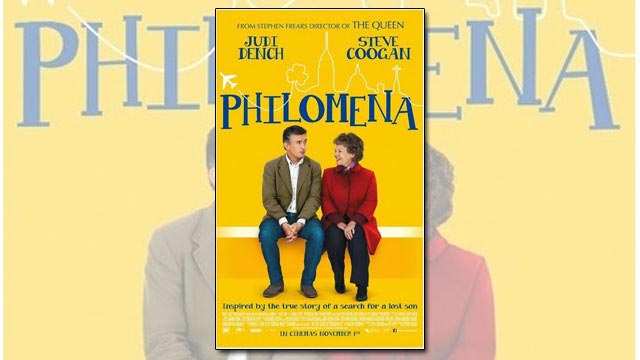 “Philomena” returns to the Martha’s Vineyard Film Center for the post-New Year’s weekend. Starring Judi Dench and based on a true story, this movie recounts an Irish woman’s search for the out-of-wedlock son she bore as a young woman. With compelling storytelling and acting, “Philomena” easily ranks as one of the best films of the year. It has already racked up Golden Globe and Screen Actors Guild nominations.

When the real Philomena Lee met a young man at a carnival in the 1960s and ended up pregnant by him, she was dispatched by her family to a Magdalene convent to have the baby. Once the child was born, Philomena had to work as an indentured servant in the convent laundry to pay for the cost of her confinement and the care of the son she bore. It was a common form of punishment in a society that frowned on young women being sexually active. The nuns conducted a lucrative business in adoption, primarily to Americans — including movie star Jane Russell — and a helpless Philomena watched as her son disappeared to the U.S. with adoptive parents.

The scandal of how Irish convents abused unwed mothers has been explored cinematically before in the 2002 film, “The Magdalene Sisters.” “Philomena” has the considerable benefit of Ms. Dench’s acting skills and a focus on the collateral damage of convent policies toward unwed mothers. The story opens at a party where Philomena’s daughter meets a journalist, Martin Sixsmith, played by British comedian Steve Coogan, and asks him to write a feature story about her mother’s quest to find the son she lost many years ago. Reluctant at first, Martin agrees to meet Philomena and is won over by her honesty and charm. Philomena has appealed to the nuns to help her find her son, but they have repeatedly stonewalled her efforts, and her daughter’s appeal to Martin is a last-ditch effort.

Philomena and Martin are very different people, and much of the appeal of the movie comes from their interactions as they try to find out what has happened to her son. Despite her mistreatment by the Magdalene nuns as a young woman, Philomena remains a devout Catholic, while Martin, a lapsed Catholic, espouses atheism. A former political aide to Prime Minister Tony Blair, he comes from a far more sophisticated world than Philomena. Yet the two learn to appreciate each other and unite in the quest to find the missing son.

Director Stephen Frears has set up the script, written by Mr. Coogan with Jeff Pope from Mr. Sixsmith’s 2009 book, like a detective story. One bit of information after another emerges in Philomena’s pursuit of answers. Along the way, these two individuals reveal their personalities and share a sense of hope. They travel back to the convent in an effort to uncover information about Philomena’s son, but the nuns insist that all the convent records were lost in a fire. Supported by Martin, Philomena continues her search, and they follow the trail to the U.S.

The remarkable 79-year-old Ms. Dench delves deep to portray Philomena’s strength of character and dignity. Despite her terrible treatment as a young woman, Philomena is a survivor, and the message “Philomena” offers to viewers is a positive and redemptive one.

Also returning to the M.V. Film Center this weekend is “Nebraska,” starring Bruce Dern as an old man heading into dementia who believes he’s won a million dollars in a magazine contest. The Film Center’s Sunday, Jan. 5, screening of “Downton Abbey’s” fourth season launch is sold out.