Joyce Wagner is a freelance writer and author of the book, “Random Overthoughts: The Best (Give or Take) of the Humor Column ‘Overthinking.’” She resides in West Tisbury and is currently at work on two historical novels. Once a week, she will ponder certain Island truths and institutions in “Overthinking.”

Most Islanders are familiar with the term “wash-a-shore.” We’re the folks who come to visit and don’t leave. I came to visit, stayed five years and left. Thirteen years later, I’m back. I’m a “rinse-a-shore.” Second “wash” cycle. Honestly, I don’t know why it took me so long to return.

A lot of rinsers will tell you the same thing. Off-Island life is brutal. When we hear someone complain about the schools here, we sagely shake our noggins and think, “You ought to check out the ones in Chicago. Or Detroit. Or L.A.”

When someone grouses about having to drive “all the way to Edgartown,” we throw back our heads and laugh.

Having recently returned to the Island, the differences are still fresh in my mind. A few that poke readily through are as follows:

We rinsers understand that Island life is not always, well, a day at the beach. Like the rest of the year-rounders, we pray for an inheritance to pay for groceries (the Island Club Card helps). While off-Islanders know to the penny how much gas costs at any gas station, we don’t even bother to look. And sometimes (especially in the summer) we feel like hostages of the Steamship Authority.

But ask any rinser, anyone who’s spent a substantial amount of time in the real world, where they’d prefer to be. My reply is likely to be, “Bathed in the remarkable, but expensive, blue light of Martha’s Vineyard.” 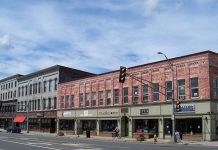 Packing for another island