Among the residents of Windemere Nursing and Rehabilitation Center on Martha’s Vineyard are a couple of the four-legged — and one of the winged — variety. Chico, a 51-year-old yellow-fronted Amazon parrot oversees things in the rest home parlor. Holly, the Dutch belted rabbit, has luxury accommodations including a two-room hutch and fenced in area in the recreation room; and Cody, a seven-year-old golden doodle, is as much a fixture around the facility as any of the staff.

The animals are there for their therapeutic benefits as well as for entertainment. Chico resides in a huge cage by a bay window (he also has an outdoor cage for summer months) where he occasionally sings along with music (he loves opera) or wild birds, but he reserves his talking for children visitors. The duties of Holly the bunny are pretty much limited to sitting on laps and allowing residents to stroke her soft black and white striped coat. Cody and Windemere’s regular dog visitors play a much more active role. They make room-to-room visits, providing cheer and goodwill of the canine variety.

Nancy Langman, program director of Community Services’ Island Counseling Center, knows a lot about the healing benefits of animals. “There’s research out there that sitting and petting a cat lowers blood pressure,” she said. “It’s a whole calming effect. You can reduce anxiety significantly.” Ms. Langman notes that Island Counseling therapists often bring kids they’re treating to the animal shelter to teach them life skills using cats and dogs. “You can just see how kids calm down when there’s an animal around,” she continued. “There’s something so innate about that.”

At Windemere, Cody keeps regular workweek hours along with his owner, Dorothy Soquist, the facility’s director of social services and admissions. “He’s the director of stress reduction services,” she joked. A big friendly muppet of a dog, Cody is a certified therapy dog who went through a battery of tests off Island to ensure he was gentle and generally unflappable around loud noises, wheelchairs, oxygen tanks, and other medical equipment. He also had to have a high startle response and prove himself non-aggressive around other animals.

“It’s his work,” Ms. Soquist said. “He just naturally gravitates towards people. He’ll go sit by them and put his head on their lap. He leans [gently] on people in wheelchairs and sometimes he’ll put his paw up for them. If he gets tired with one paw he’ll do the other one.”

Not only does Cody provide comfort and companionship to residents, Ms. Soquist has observed that he benefits staff morale as well. “He’s made a lot of changes in the personality of the staff,” she said. “He’s reduced stress among the staff and the families of the residents. He certainly lifts everyone’s spirits. He makes people laugh.”

Joining Cody in his therapy duties is a canine volunteer staff of seven who each pay visits, accompanied by their owners, once a week. The crew of dogs individually makes the rounds to the rooms of animal loving residents, receiving pats — and sometimes treats — and generally providing affection and diversion, while their owners have a chance to visit with the residents. The dogs, as well as the owners, have to be approved before visiting. The owner needs to pass a CORI check. The dog needs a letter from a vet proving that the animal is up-to-date on vaccinations and flea and tick protection, and that it is neither aggressive with people or other animals nor a jumper.

“The person with the dog goes room to room and knocks on the door to see if they want a visit. 99 out of 100 times they say yes,” said recreation therapy director Betsy Burmeister. “Some are chatty and like to have someone visit with them. The dogs are natural conversation starters. Or they just pet the dog for a few minutes. It’s very calming. People love to see the animals. Most people had dogs at home. They start talking about the animals they had growing up or that their children had when they were little.”

Earlier this month, a new recruit — a seven-year-old golden retriever named Bonnie — was introduced to the staff and residents. Bonnie’s owners, Joan and Al Eville of Oak Bluffs, brought Bonnie from room to room along with Mary Holmes, Windemere’s memory care program coordinator. While learning their way around the facility, the Evilles stopped to look at a framed picture of Sam, a dog that exhibits a marked resemblance to their Bonnie. Sam was the original Windemere therapy dog, serving the facility’s residents for nine years, until he died in 2010. “We had a ceremony here when he died,” Ms. Burmeister said. “We have a dogwood tree outside for him that was donated by his owne, Christopher Brooks of Le Roux.”

The Evilles hold a handful of volunteer jobs between them and they decided that it was time that Bonnie pitched in as well. “She’s so good with our grandchildren,” said Ms. Eville. “We thought if she’s so gentle with young people she’d be good with older people as well.”

Mr. Eville added, “We did a trial with a friend whose mother was 100. It was very uplifting. She came alive. Towards the end, she didn’t speak, but she petted Bonnie and recognized her.”

On Bonnie’s rounds, along with lots of head pats, she gets a treat from Mary O’Rourke, formerly of Bridgewater. “My son brings boxes of biscuits,” she said, pulling open a dresser drawer where she keeps the treats. “They know right where they are. If I’m not here I leave them out on top. One of the dogs left me a thank-you note once.

“I always had dogs,” Ms. O’Rourke continued. “I had a toy terrier, then a part Shepard-part labrador who was the love of my life. I love all animals.”

A love of animals seems to be a common denominator among the Windemere residents. And, luckily for them, there’s no shortage of species who make regular visits. Along with the seven weekly dog visitors (and one cat — a Siamese named Sketch) the facility hosts a veritable menagerie of critters through a couple of different programs.

During the summer months, it would not be unusual to see an alpaca or two hanging out in Windemere’s outdoor patio/garden area, and other farms provide four-legged visitors on a regular basis. Among those who have stopped by for petting duties — along with an informational talk — have been miniature donkeys and horses, lambs, and goats once a month. “They love them,” Ms. Burmeister said of the residents. “They all go out to see them.”

Gus Ben David, director of the World of Reptiles and Birds Park in Oak Bluffs, provides once a year visitors of a more exotic nature including snakes, lizards, and owls. An off-Island rescue group, Animal World Experiences of Stoughton, brings an annual educational and interactive animal experience with critters such as chinchillas, guinea pigs, rabbits, snakes, and iguanas.

Last November Felix Neck launched a seasonal sensory-oriented program called Nature Connection. Once a month, Josey Kirkland, Felix Neck’s education coordinator/camp director, will bring animals to Windemere for a visit and informational session. “The idea is bringing nature indoors to residents who have limited access to the outdoors,” Ms. Kirkland said. “In November we celebrated the fall harvest and Thanksgiving. Along with natural materials like squashes and fall leaves we borrowed a turkey from The FARM Institute. They loved it. We got really excellent feedback.”

In December a box turtle, representing winter hibernators, was brought in for a visit. Residents had the chance to pat or hold the reptile. “We set up a mini environment in the recreation room just to be able to get them to see things they wouldn’t normally see,” Ms. Kirkland said. January’s program on weaving warmth will feature a lamb and a spinning demonstration by Rebecca Gilbert of Native Earth Teaching Farm in Chilmark.

“When animals come they make everybody happy,” Ms. Burmeister concluded. “It puts a smile on everyone’s face to see them and pet them.” The dog visitors seem to enjoy the experience just as much. She says that the owners of River, the German shepherd, really looks forward to the visits. “They say that he can’t wait to get out of the car when they pull into the parking lot.”

Too bad most humans don’t have the same response at the start of their workday.

Springtime for Turkeys in Vineyard Haven 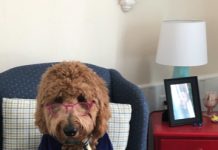 What brings us joy