At the Island Bridge Club in West Tisbury on January 30, eight pairs completed. Finishing first were Bea Phear and Cecily Greenaway, followed by David Donald and Rich Colter in second, and Barbara Besse and Bill Blakesley in third.

The Edgartown Bridge Club did not report results this week. However, Martha’s Vineyard took the Bermuda Regional by storm, represented by Gail Farrish, Charlie Harff, Mollie Whalen and Joe Ashcroft. As a team, the four won two championships.  On Sunday, January 28, the Bracketed Round Robin Teams were held. Our Vineyard team won Bracket Four, out of seven total brackets.

On Monday the Bracketed Knockout Teams began. Our Vineyard team was placed in the third bracket and successfully advanced day by day to the finals on Thursday. A playoff of two boards was needed to advance to the semi-finals. In the finals, our team comfortably won our second championship of the week. In addition, Gail and Charlie competed in several pair events, winning a section top and fourth overall in the Gold Rush pairs. They also placed in an opening-night charity event. A good time was had by all at the Friday banquet, where prizes were awarded.

In more off-Island bridge competition news, David Donald of Vineyard Haven recently finished first at a Eastern Mass. Bridge Association (EMBA) Sectional tournament. He won Swiss Teams at the Holiday Sectional held in Watertown. EMBA’s next tournament is February 21-23 at the Armenian Cultural Center in Watertown. Players will compete at all levels. There is a pairing desk for those who need partners. The cost is $10 per session.  For more information go to www.acblemba.org. 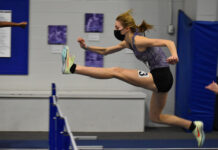