Martha’s Vineyard has no shortage of restaurants, and behind each one, there’s a top-of-the-line chef. The Times decided to get to know these culinary wonders and share their stories each week.

Max Eagan has been cooking for Rocco’s for a year and is slated to be executive chef of the dining room at Isola (formerly Lattanzi’s) in Edgartown. Before Rocco’s, he was executive chef at Lambert’s Cove Inn for two years. Although he has no formal training, he achieved executive chef status at the age of 28.

How did you come to be on the Island?

I grew up here. We moved here when I was under one year, so I’m not a true Islander. I grew up in Edgartown and, when I was in fifth grade, we moved to Vineyard Haven.

As soon as I could work – age 14. I worked at the Rotisserie in Edgartown and baked muffins at Mrs. Miller’s Muffins in downtown Edgartown. I did prep work, dishes, baked muffins and cookies — stuff like that.

How did you come to work for Rocco’s?

After working at Lambert’s Cove Inn, I was going to take a year off from the high stress level of fine dining cooking. I grew up with the son of the owner of Rocco’s and they needed an extra hand. I was giving them an extra hand while I was trying to figure out what I was going to do and…I stayed. I didn’t want to do it forever, but fortunately we’re taking on this new venture. (The owners of Rocco’s have recently acquired Lattanzi’s. The restaurant is scheduled to reopen in May, renamed Isola.) I’m going to be executive chef of the restaurant.

I don’t think any chef hasn’t! I’m an avid fisherman so every time I get a chance I go fishing on the Island. One day we stayed really late (at Lambert’s Cove Inn) and got all our prep work done so we could come in late the next day. We showed up at 4 o’clock, just a couple of hours before service, and all the main refrigerators were about 80 degrees. All of our hard work and prep was basically destroyed and we had two hours to start from scratch before the first guest arrived. We made it work. We had to change the menu around, but we made it work.

Have you ever had a meal of yours that was part of a big event?

My sous chef at Lambert’s Cove Inn had a good friend who wanted to propose to his girlfriend. He was coming to the Vineyard and we tricked him and made a dinner reservation for Monday. We’re closed on Monday. We went out the day before and went fishing and foraging — I’m a big forager on the Island. They came into the restaurant and no one was there. They couldn’t figure out why there weren’t any other customers. We brought this big spread out of local stuff that we had caught ourselves. It was a pretty cool thing to do. He asked her to marry him, and they had the whole restaurant to themselves.

What was the best single bite you ate in the last week?

I just got back from vacation. I was on the island of Nevis in the Caribbean and met an old lady who made me some fresh conch ceviche. I bit down and I thought there was a piece of shell in it. She was standing right next to me, wondering how it was. I said “Uhng” and said I hurt my tooth, and I spit out a conch pearl! I guess they’re pretty rare. And it was a nice one, they tell me. It was a little beach bar and they said I should buy everyone a round of drinks and they were parading around with the pearl and showing everybody. Although it was shocking, I would say that was the best bite.

Besides a sharp chef’s knife, a nice serving spoon. I can use it as a spatula. I can do anything with that. I probably have over 100 serving spoons.

What do you cook for a romantic evening with your girlfriend?

This time of year, she really likes venison chili. She always wants me to make it for her. I do a venison chili with Guinness and dark chocolate.

This one’s easy. Self-caught spear-fished tautog (blackfish), roasted whole or salt-baked; dug up clams raw and on the grill; and a fresh tomato salad. That’s all I need. Dessert? I’m not a huge a dessert guy. My good friend, Kevin Brennan, brews hard cider and I make homemade wine berry brandy. I’ll take a shot of brandy and one of his local ciders for dessert.

I do most of my fishing at night, so my day off would be waking up late and hanging out at the beach with my friends — and probably doing more fishing. 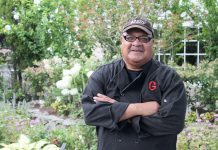 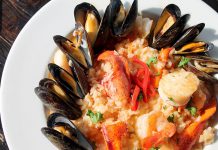 Blue Canoe: A taste of the sea, by the sea 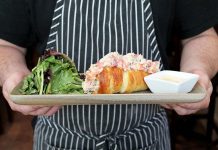