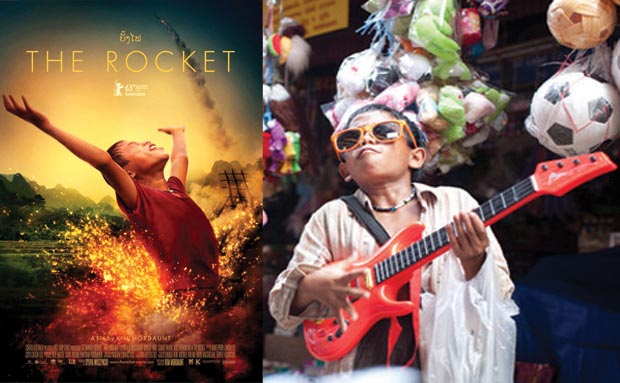 Mixing ethnic fable and social realism, “The Rocket” portrays the world of 10-year-old Ahlo (Sitthiphon Disamoe), as he struggles to elude the Lao curse of being born a twin whose sibling dies at birth. The film opens with Ahlo’s mother, Mali (Alice Keohavong), in the throes of labor. Her mother-in-law Taitok (Bunsri Yindi) urges her to destroy newborn Ahlo on the grounds that as a surviving twin he will bring the family bad luck, but Mali refuses. Ahlo’s twin is buried in secret under the family’s 300-year-old mango tree.

Ten years later, the boy has grown into a spunky, independent troublemaker. When the family is ousted from their village to make way for a new hydroelectric dam that will flood the area, Ahlo insists on dragging his boat through the mountains to the relocation village where the socialist government has promised villagers new housing with electricity and running water. When an accident results in Mali’s death, grandmother Taitok blames Ahlo as a cursed child.

Instead of a glorious modern settlement, Ahlo, his father, Toma (Sumrit Warin), and Taitok find themselves in a makeshift tent city with no sign of the fertile land that would allow them to make a living farming. A nine-year-old orphan girl, Kia (Loungnam Kaosainam), befriends Ahlo and helps him hunt for a place to plant the mango that his mother has promised will replace the tree they have lost to the dam project flooding their former home.

Kia, whose parents have died from malaria, lives with her eccentric Uncle Purple (Suthep Po-ngam), who idolizes singer James Brown, drinks too much, and wears a purple suit dating from his days aiding American forces fighting the Vietnamese in Laos. Ahlo’s alliance with Uncle Purple leads to his family’s expulsion from the relocation village, and they escape in a cart filled with Sleeping Tigers, as the bombs left behind by U.S. forces are called.

Searching for a place to make a new home, Ahlo and his family arrive in a village that will hold a rocket competition to mark the end of the dry season. The person who launches the most powerful rocket will receive a large cash prize, and Ahlo is determined to win the contest so he can free the family from poverty.

Mr. Mordaunt’s award-winning 2007 documentary, “Bomb Harvest,” describes how Lao children collect bombs to sell as scrap metal. The director’s extensive background in documentary filmmaking allows him to invest “The Rocket” with many authentic details. A number of the movie’s scenes come from an actual rocket contest, and Uncle Purple is based on a real person. Hydroelectric dams built by multinational companies have displaced more than 60 million people worldwide and wrested control of water rights from native peoples. The child actor who plays Ahlo was a street urchin who survived by begging before being tapped to play in the movie.

The director skillfully mixes elements of traditional Lao culture with details drawn from modern life in Laos. Ahlo, Kia, Uncle Purple, along with Ahlo’s mother, father, and grandmother animate “The Rocket” and provide a haunting record of one country’s struggles in the aftermath of the Vietnam War.