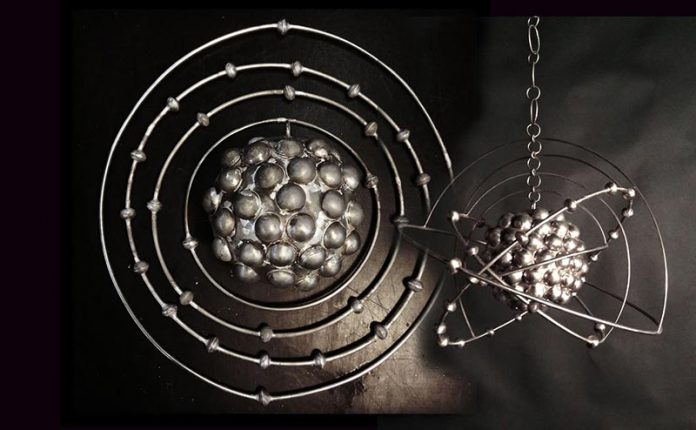 After 18 is an ongoing series about what four graduates from the class of 2013 are doing this year. This week’s dispatch is from Sara Thompson, who writes from Portland, Oregon, where she is attending the Oregon College of Art and Craft.

Art and science, this is what I like. At the end of last semester, I wanted to combine my love of science and metalwork. My final project for my metals class had to incorporate at least three techniques aside from soldering that we had learned, and involve the idea of connectivity. Usually I do jewelry work, so for this project I thought I’d branch out and try to make a sculptural piece.

Immediately, I knew what I wanted to create. I want my work to engage viewers while incorporating educational scientific realms; essentially having viewers learn about science by experiencing art through multiple senses. I envisioned creating an atom of an element of metal out of that metal. I want to show that even though atoms are tiny, they still exist and they’re all around us. We’re even made out of them! Yet, most of us don’t even realize that we’re all made out of atoms — nevertheless that they are the building blocks of everything around us. Anything in the universe, aside from energy, is made out of matter. Matter, elements in particular, can be broken down into smaller and smaller bits until you reach the atomic structure, since atoms are the basic building blocks of matter. The atom is a collection of protons, neutrons, and electrons that make up the smallest form of matter of a particular element. In the center of the atom is the atomic nucleus which is made out of protons and neutrons. The number of protons identify what element the atom is. The electrons whip around the nucleus, encasing it in a sphere of constant movement. I was determined to make an atomic structure that viewers could see and touch.

Silver is my go-to metal. However, given that this project was going to be a sculpture and the atom was going to be roughly seven inches in diameter, silver was going to be way over my budget. I pondered: what metals did I have access to and which atomic structure was I able to create. Gold, oh no; copper, I’m not too crazy about copper, especially since I was using silver solder; brass, I had access to but it isn’t an element. That left me with nickel. Nickel is darker than silver and I had easy access to it. I bought two sheets of nickel at 20 and 22 gauge and wire at 12 and 22 gauge. (The higher the gauge, the thinner the metal.)

I was going to take the 20 gauge nickel and cut two circles out of the same size. Each circle was going to be hammered into a hemisphere and then the hemispheres were going to be soldered together to create a sphere. I took the thinner piece of metal and used a disk cutter to punch out small circles 12 millimeters in diameter. I placed each circle in a steel “dapping” block that has different size hemispheres carved out. These are used to hammer the circle into, resulting in a hemisphere shape. These smaller hemispheres were going to be used to create the nucleus. Since the nucleus of nickel is a collective 59 spheres (28 protons and 31 neutrons), I was going to solder 59 hemispheres to the large sphere to create the illusion of this ball of spheres condensed together. It was terrifying to solder 59 things one after another, close together because sometimes soldering closed pieces without a way for the air to escape from the inside creates issues with air pressure — possible explosions — if the piece is big enough and it’s heated more than once. Luckily, my work was small enough, so in the end, I had little fear, although it was my first time soldering closed forms. After successfully soldering all hemispheres to the sphere, I had to clean up my excess solder.

My next hurdle was to figure out how to make the electrons. The electrons fly around the nucleus like a cloud. However, there are electron orbitals that limit how many electrons can be in each orbital. Think of them like vehicles. Certain vehicles only have a certain amount of seats. The first orbital or automobile, has 2, then 8, 16, etc… So nickel has 28 electrons and 4 orbitals. I decided to make 28 handmade beads to represent the electrons. Using the same technique for hemispheres, I made even smaller hemispheres and soldered them together. I drilled holes to fit the 12 gauge wire. To make the orbitals, I beaded the beads onto the wire and soldered the wire closed and the beads proportionally apart for the four orbitals. The orbitals gradually increased in size so that one could fit inside another and orbit around the nucleus.

Now, how the hell to make this thing be mechanical and move, at 11 o’clock at night the night before it’s due? I sat at my bench, nickel dust all over my face, and stared at my contraption. Then, I just went for it, no sketching, no planning. I could see exactly what I needed to do in my mind. I started to make handmade chain with the 22 gauge wire. I soldered a half loop to the nucleus to create two firm attachments and then continued to individually solder each loop, alternating small and large ones. To attach the orbitals, I would create a loop and slip the orbitals into the large loop and solder the loop closed, but I made sure not to have the orbitals touching. Since the orbitals weren’t touching the loops, they could move freely and spin around the nucleus mimicking actual electrons. After attaching the orbitals, I made even large loops to hand make four feet of chain to suspend the atom from the ceiling.

With the atom suspended, the atom hangs roughly lower than eye level. My sculpture behaves like a mobile: once it has a little bit of energy to rotate, it rotates in one direction, then back in another, and back again until it slows down eventually, looking like it’s still until more energy comes to set it in motion again. Viewers can see the electrons hovering around in their orbitals but never touching the nucleus. The orbitals can be adjusted at different angles to highlight how the position of an electron is ever changing. The nucleus ridges of the protons and neutrons can be touched and rubbed over.

It’s an atom of nickel made out of nickel.

Over the hills and fore away