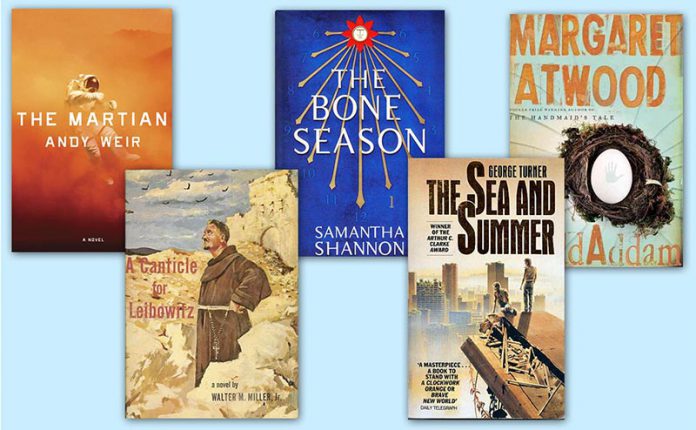 “The Bone Season” by Samantha Shannon – The year is 2059, and it is not a happy time. A totalitarian state rules England, outlawing seers, soothsayers, and “dreamcatchers” to their own universe with other undesirables. Paige Mahoney, a dreamcatcher of high order, is kidnapped and taken to be confined in the Residence of Magdalen, controlled by Arcturus, Warden of Mesarthim. This is a multilayered dystopian novel.

“The Martian” by Andy Weir – Mark Watney is an astronaut sent to live for a time on Mars with a crew. When a dust storm comes up, the crew is forced to abandon their mission and return to Earth, leaving Watney behind because they believe him to be dead. With MacGyver-like skill, a few potatoes, and plenty of duct tape, this snarky, wise-cracking, nerdy hero fills this action-packed novel, which will delight both hard core science fiction fans and the general reader alike.

“A Canticle for Leibowitz” by Walter M. Miller – Every science fiction-fantasy lover, young and old, should read this 1960 classic. Civilization has been destroyed by a global nuclear war. There has been a violent backlash against technology and advanced learning. Even people who can read have been killed, leading to mass destruction of books and almost universal illiteracy. Leibowitz, who has survived the war, smuggles books into a secret hiding place, where they are rediscovered 600 years later by a young monk. A most extraordinary novel.

“The Sea and Summer” by George Turner – In 2041, the father of Francis and Teddy Conway loses his job and commits suicide. The family plummets in the economic world. Teddy is gifted and quickly is sent for training in police intelligence. Francis, left behind, is a gifted mathematician in a time when mental arithmetic has been forgotten. Trying to subsist on the inadequate charity of the state, like 90 percent of the rest of the population, Francis becomes involved with a white collar criminal who needs to hide her records from the government.

“MaddAddam” by Margaret Atwood – This is the last of the books in Atwood’s trilogy. It began with “Oryx and Crake,” the  story of Jimmy, who loses his best friend, Crake, and the beautiful, but elusive Oryx, whom Jimmy and Crake both loved. The environment has been destroyed by powerful corporations practicing genetic engineering. In the second installation, “Year of the Flood” an anticipated dry flood has occurred, killing most of mankind. Toby is a young can-do survivor, who returns in “MaddAddam along with Jimmy.” The few survivors, a traumatized, cynical group, band together, using all their self-preservation skills to create a new world. Great writing filled with murder, sexual tension, action, and lots of humor.