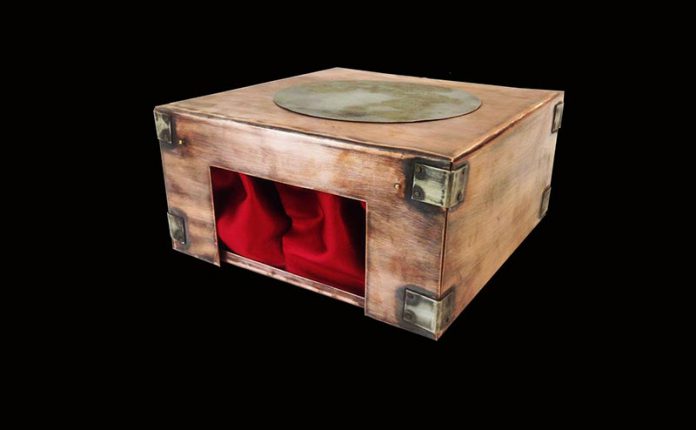 After 18 is an ongoing series about what four graduates from the class of 2013 are doing this year.This week’s dispatch is from Sara Thompson, who writes from Portland, Oregon, where she is attending the Oregon College of Art and Craft.

I want viewers to experience the moon in a different way. I want to take my work in a direction that warrants artistic appreciation and allows for scientific and educational inquiries through creating pieces that viewers can interact with. My atom was the start. Over the last few weeks, I have embarked to craft this new piece.

The moon is a celestial body that has been wandering the skies of our planet for as long as we can remember. We’ve been there. We traveled 239,000 miles; it’s the only place we’ve been aside from mother Earth. This lunar body, trapped in a gravitational dance and tug of war between the earth and the sun. It is slowly leaving our side at the rate of one and a half inches a year. The moon is something more than a gray crescent and sphere in the sky. We have seen the moon nearly every day for hundreds of thousands of years, but very few have been lucky to feel and experience it.

For this project in metals,  I needed to create an impression. I also wanted to continue my exploration of combining metalsmithing with science. I envisioned bringing this celestial body down to Earth.

The moon, like Earth, has craters and canyons thousands of meters deep. I wanted to create the impression of the lunar surface through recreating the moon’s landscape based on a topographic map. Viewers could have a multi-sensory experience — feeling the moon while looking at an etched photo — to create an experience of what one sees in the sky while running one’s fingers along the canyons and craters.

The way I created the topographic map of the moon was through a technique called chasing and repousse. Chasing and repousse is when an artist takes steel tools and hammers the tools into a flat sheet of metal to push it to a 3-D state which gives it volume. (Repousse: hammering from the backside to push the metal up; chasing: hammering the metal down from the front side to create finer detail.)

Doing a little bit of blacksmithing and forging, I shaped raw tool steel to meet the shapes and sizes I needed for the moon. After I formed them into the shape I needed, I heated and tempered them to make them extremely hard, so they could stand hundreds of hours of hammering. I also made a masonite dye form, which is a sandwich of one piece of wood, masonite (hardboard), the piece of metal (that will be the middle piece) and another piece of masonite. Then I drilled holes in all the layers to allow pins, which will keep it together.

Having all the tools I needed, I found a topographic map of the near side of the moon, the side we see. I was going to make the moon large enough to have a man’s hand fit around it comfortably. I didn’t want it too large because doing large scale metalsmithing is rather difficult, especially as a first year student. (My third year I get to make a teapot from a flat sheet of metal; that will something.) Anyway, I bought an 8 x 8 inch piece of 16-gauge (1.29mm) piece of copper. I calculated that the topography was going to be scaled to 1km = 4mm and 6 inches in diameter. You can think of it like sea level. Whatever is under sea level needs to be chased down while everything else above sea level needs to be pushed up from the back side. So at the highest elevation, I was pushing the metal up 16mm above sea level while not too far way, I was pushing and stretching the metal 16mm below sea level to create the craters we see on the moon.

Let’s put this in perspective. I was hammering a flat sheet of metal to have an overall distance of 32 mm. When you hammer metal, you make it thinner and harder. Well, I hammered my metal so much that I tore it open.

I tore my metal, twice.

Yes mother, I truly sit in front of a vise and hammer metal for hours. Then when I anneal this big piece of metal, I use two giant air compressor torches that weight about 15 pounds each. They’re kinda’ like mini flame throwers, to make the metal soft again so I can keep hammering it.

After a good 50 hours of hammering, I made a topographic map of the moon out of metal.

This is going to get a little complicated. I’ll try to walk you through my creative process for this project, but I think a little differently. When I create pieces, I see them crystal clear in my mind. There is no sketchbook needed, no words need to be said… it’s a quiet process, all visual and only visual. It’s kind of like symbolism. Therefore, explaining my designs, how I make them, how I think, and simply why the hell I’m an artist who doesn’t use a sketchbook is difficult. I see them and then I bring them to life, sculptural, jewelry, and drawings included.

Figuring out and consulting this project with my professor, I had for the first time, someone respect my thinking process. It was an extraordinary moment. My professor said to me, “You have this unusual way of thinking, you just see it….and then you actually make it….. I trust you… just go, just go, and make it.”

So now, I had this….thing…the topographic map in a square piece of metal from the sandwich. I cut out the map and envisioned how I was going to create the rest of my piece. Remember, I needed to make an impression and a multi-sense experience. I was going to house the moon within a box. The box would have an opening. Viewers would be able to put their hand through red curtains in an opening of the box. Similar to how astronauts first went into the abyss of space. They have a subtle idea of that they’re getting into, but not really. Now back to the box. This box, it needed to be big enough to have the moon in it and also enough space to allow you to move your hand around in it while exploring the craters of the moon. I settled on having the box be 8 x 8 x 5 inches.

I soon discovered that the box break did not make ninety degree angles and that my box was still too big, even after I cut it down to four inches in height. As a solution, I hand-folded the rest of the sides up. I had to gently hammer the sides up from a 30 to roughly 90 degree angle. This gave the box an imperfect character to it. I began to play with this characteristic of the box. I connected the sides of the box with nickel tabs and rivets, though the tabs weren’t 90 degree angles from the box break making them a little crooked. Then I ran into another problem, the only escutcheon pins (nails basically) I had were brassplated steel. The whole point of using these pins was to make my life a little bit easier. I was using the pins to rivet the nickel tabs to the box, 32 times. I riveted steel 32 times. It’s more difficult than it sounds, basically, using a steel hammer to spread steel…. it doesn’t work very well, but I did it somehow. (I will never have to rivet again as the other part of the agreement due to the nightmare of this.)

For the opening of the box, where you put your hand through, I made an addition of silky red curtains. I toyed with the idea of going to a theater or show and seeing those classic red, velvety curtains. One would put one’s hand through as one begins to the experience of the Moon. On top of the box, I riveted a hazy photo etching of the moon so that when viewers put their hands in the box, the craters on the photos match the metal surface inside.

My moon impression was almost done. With all of its charm and quirks, it reminded me of something old. Something that has been passed down from a grandparent, handmade and aged. I gave the box a black oxide and a 220 grit finish to mimic a worn, old box passed down paralleling the idea that the Moon and our relationship with the moon that has been dancing around us for billions of years and billions to come as we experience the moon in a new way.