From casual weddings to over-the-top themed galas, in over two decades in the business, caterer Annie Foley has gathered a lifetime of memories.

“They’re all memorable,” she says when asked to recall some of her favorites. “The Vineyard is special. It’s unique. It’s lovely to be part of it all.” Still, some parties have left an impression with Ms. Foley owing to unique themes or special features.

Sometimes, you don’t need much of an excuse for a party.

Inspired by the alignment of digits on August 8, 2008 one client decided to celebrate with a extravagant Asian themed party. “We did an 8/8/08 party,” recalls Ms. Foley, “Ming Tsai [celebrity chef and cooking show host] was the featured chef. It was just lavish. Everything was very stylized. We had red silk tablecloths, black oversized square plates. The servers wore black cocktail dresses with a hint of red. There were orchids or floating lotus flowers on every table.” The aquatic flowers came from a pond on the West Tisbury property of Ms. Foley’s friend who waded in and picked an armful for the party.

One wedding celebration — a three-day affair  on the Vineyard — was such a success that the couple hired Ms. Foley and crew to  cater a second marathon party in Boston. “They did a three-day wedding in Boston for their Boston friends,” says Ms. Foley, “We brought the whole crew. It was at a private home with massive tents. There were ice sculptures including a ten-foot-high lighthouse with a light going around it.”

Another party featured a Moroccan theme with a Moorish tent, Moroccan food and music, and a belly dancer. The staff was dressed appropriately with imported outfits provided by the hosts.

These are just a few examples of lavish parties that Ms. Foley has brought her expertise to. She has been operating a catering business on the Vineyard for 24 years — ever since she moved to the Island from London in 1990.

And she loves what she does. “It’s creative,” she says, “It’s challenging. We meet a lot of different people. We’re at fabulous properties. I have a great crew and we have a fun time doing it. It keeps it all interesting. There are always different challenges.”

One such challenge was getting a crew across Oyster Pond for a beach party. Not quite knowing what they were getting themselves into, the staff arrived in full uniform, only to find that they would have to row across the pond with all of the food and equipment. Arriving at the location — sweating in their long sleeve shirts and khaki pants — they discovered another party of sorts further down the beach. “Just to the right was Chelsea Clinton and her boyfriend surrounded by Secret Service. It was a surreal scene,” says Ms. Foley, “I just love the visual.”

Ms. Foley has catered a number of parties where the Clintons were in attendance and the former president completely charmed her. “He was always friendly. He was always full of pizzazz and vitality. He would come in the kitchen and eat the chicken sausage right out off the pan when it came out of the oven — which we loved.”

While being involved in high-end events at luxury venues and homes is exciting, Ms. Foley also appreciates the laid-back atmosphere of the typical Vineyard wedding. “Most people want casual,” she says, “They don’t come to the Vineyard for overly formal. You go to the Hamptons for that. People come to the Vineyard to relax.”

Ms. Foley especially treasures parties where a little bit of the hosts’ personality has shined through. “I tell people that any personal touch — a recipe, a family tradition — makes a difference,” she says. “You don’t want to be cookie-cutter. Whatever you can do to bring your personality into a party will make it special.”

She recalls one bride who surprised her Philadelphia native husband by providing a late-night Philly cheesesteak station. “It was a lot more popular than anyone expected,” says Ms. Foley, “The guys, especially, were all lined up.”

Another couple chose a unique decorative touch. “I did one gay wedding last year where they had model boats on each table as the centerpieces,” says Ms. Foley, “At the end of the meal kids ran off and played with them. I just loved it.”

From a 400-guest wedding with a 12-piece band and a caviar and martini bar, to an annual wine dinner with multiple courses and a California vintner as special guest, to simple picnics and barn weddings, Ms. Foley enjoys them all. “I love cooking,” she says, “I love food. It’s still my interest and passion. I have about 400 cookbooks. I’m always looking for new ideas.” 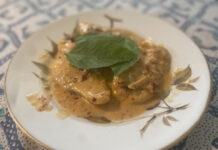