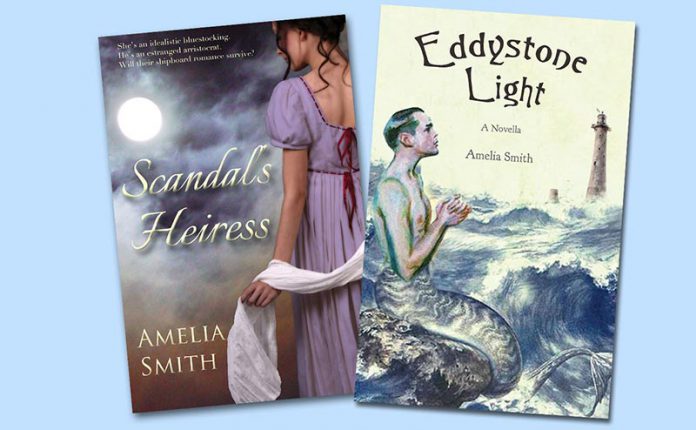 “Scandal’s Heiress” is no bodice-ripper, although a steamy make-out scene aboard an English frigate sets the plot in motion for the romance to follow. This is a Regency romance, a subgenre of historical romance novels, which means it’s set during the British Regency of 1811 to 1820 or, more loosely, the early 19th century.

Although bodices were cut low, designed to show off cleavage, the rules of deportment were set high. Should a bodice be actually ripped, a young lady would be “ruined” for decent society, although the shrewd and clever Amelia Smith of West Tisbury makes it clear that this same society was far from the perfect setting to call “decent,” much less home.

Young Hyacinth Grey is a mixed-caste young lady, her father a highly regarded naval officer in Gibraltar, her long-dead mother the offspring of a infamous courtesan of an earlier era when powdered wigs set the “ton.” When Hyacinth receives the summons to come to London to accept her grandma’s inheritance of a large estate in Wales, she’s first shipped to her aunt, Lady Talbot in London, who’ll try to render the young girl suitable for the elite — not an easy fit.

Into this mash up of class nuances comes Thomas Smithson (in actuality the reluctant heir of the aristocrat Pentlys of London and assorted country homes), a dashing and, of course, brooding young man who fled family ties and secret sins by spending the last decade in India, making his fortune and seeing his lovely — and pregnant — young Hindu mistress killed in the Sepoy Rebellion. He too has been summoned back to England, in his case to sort out his late older brother’s estate.

Sir Pently and Miss Grey take ship together out of Gibraltar, amid the shambles caused by The Battle of Trafalgar in October 1805. On top of Hyacinth’s other social impedimenta, she has an inconvenient kid brother, George, son of Capt. Grey and his late housekeeper. George is a lovable engine of havoc, as amply displayed when he dives into a turbulent sea with the stupid idea of swimming back to Spain. Thomas leaps in after him, and the already packed plot thickens.

Ms. Smith is only getting started. The welfare of our protagonists is far more threatened in London’s drawing rooms. The Island author seems to have spent an earlier incarnation in Regency England, her ear finely tuned to “polite” conversation that is really quite nasty in its subtexts. Even butlers can be dispensers of snubs — perhaps especially butlers, as we’ve seen from “Downton Abbey” — and in the world of “Scandal’s Heiress,” the reader is rooting with all of his or her heart for Hyacinth to escape this mean world and take advantage of her grandmother’s ill-gotten gains.

Reached at her home this past Sunday, Ms. Smith was busy with her two tree-climbing, garden-uprooting kids, with a rooster crowing in the background. She said that she never reads contemporary romances, but enjoys the Regency genre. “I love nothing better than to curl up on the sofa with a pot of tea, a plate of cookies, and a good historical romance.”

She wrote the rough draft in 2008 when she and her husband lived briefly in Ireland; a wonderful land for feeding the imagination about long-ago times. She has since worked the new trend in self-publishing. She blazed a trail for herself, starting out by soliciting feedback for her manuscript from Beta Readers, an Internet club of writers who provide critiques for each other. She hired a copy editor for a polished final draft, and then went on to learn both eBook and hard copy production mechanics.

The result is a hard-to-put-down novel, even without the plate of cookies. Quite honestly, I’d long ago believed I’d outgrown historical romance, but it was a mistake to put this pleasure aside. The good ones, such as “Scandal’s Heiress,” stand as the offspring — legitimate or otherwise — of Jane Austen, and once again the reader is back in a luxe drawing room as someone plays the pianoforte, and the suspense of whether or not the young lovers will ever get their stars uncrossed drives the story forward at a propulsive speed.

Ms. Smith has another book on offer, “Eddystone Light,” a novella for grownups, a fable from a folk song Ms. Smith learned as a child: “My father was the keeper of the Eddystone Light / Slept with a mermaid one fine night / from this union there came three / A porpoise and a porgy and the other was me,” an enchanting tale with a strong New England flavor.

Both “Scandal’s Heiress” and “Eddystone Light” are available at Bunch of Grapes, Alley’s General Store, and online. Ms. Smith entered her Regency romance into the Amazon Breakout Novel Award and has, of this date, made it to the quarter finals. She’ll know within a month how she fared in the next rung.