This is the fourth installment in a continuing look at opiate abuse and its effect on the Island community and Islanders. The series began on Jan. 2 “Opiate addiction hits home,” and was followed on Jan. 22 “Martha’s Vineyard police and physicians confront opiate abuse,” and on Feb. 12 “Opiates, a love story.”

On March 27, Governor Deval Patrick declared opioid addiction a public health emergency in Massachusetts. He entrusted $20 million to the Department of Public Health (DPH) with a mandate to combat overdoses, to slow the spread of the epidemic with prevention and education, and to map a long-term solution for the Commonwealth.

Martha’s Vineyard is not immune. Six Islanders have died of opiate overdose since August, according to Dr. Charles Silberstein, psychiatrist and addiction specialist at Martha’s Vineyard Hospital. Island-wide, there was one heroin arrest in 2012 and 10 heroin arrests in 2013; in 2012 there were 13 arrests for oxycodone and percocet pills, in 2013 there were 15 arrests. Anecdotally, Island law enforcement, counselors, and physicians say that opiate addiction, and the crime that invariably comes with it, have become a scourge on the Island.

“We definitely feel it in the emergency room,” Dr. Jeffrey Zack, director of emergency medicine at Martha’s Vineyard Hospital, told The Times. “We’ve seen a big rise in cases related to opiates and heroin.”

Dr. Zack said that people often come to the emergency room (ER) for services the hospital doesn’t provide, which can take up valuable beds, sometimes for days.

“We want people to feel this is a safe place to get help. We’re the backstop on the Island, and we won’t turn anyone away. That said, we’re not a detox facility or a psychiatric facility. If it’s not a life-threatening situation, the first call I’d make would be to Hazel or Dianne,” he said, referring to Hazel Teagan and Dianne Mackellar, the substance abuse counselors at the hospital, who between them have close to 70 years of experience.

“All they have to do is call the main number at the hospital, 508-693-0410, and ask for the substance abuse team,” Ms. Teagan said. “Either Dianne or myself will get beeped and we’ll answer the call.”

Even though the substance abuse team is inexplicably absent from the hospital website, Ms. Mackellar and Ms. Teagan are available via the hospital main phone number, 24/7.

“We do a lot of work on the phone, educating people, giving phone numbers to call, and finding beds for people who need them,” Ms. Mackellar said. “Hazel and I work very closely together. We know the ins and outs of a system that can be very complicated.”

Ms. Mackellar also encouraged people to call rehabilitation facilities directly. “I’d definitely recommend calling a place like Gosnold and getting on the list,” she said, referring to Gosnold addiction treatment center on the Cape, where a high percentage of Islanders have gone for treatment. “They don’t need a referral. Sometimes it can take a while, but if you call every day, you’ll get a bed.”
Ms. Mackellar said it has to be the addict, not a loved one, who makes the call. “That call is significant,” she said. “It’s the addict saying ‘I want to do something.’”

Ms. Teagan said the absence of a detox facility on the Island is a significant shortcoming. “We had a facility here and it was wonderful. It was small but it worked. It also saved a lot of people from relapsing. But after the hospital filed for Chapter 11, the detox unit was one of the first things to go,” she said, referring to the hospital bankruptcy filing in December 1996. “It hasn’t come back, and I don’t know if it ever will.”

“The numbers just aren’t there,” Tim Walsh, Martha’s Vineyard Hospital chief executive officer, said in a phone call with The Times. “I get a lot of grief about this, but it’s a very expensive proposition. You’d need at least three full-time doctors, and nurses and support staff. The population here doesn’t support it.”

Ray Tamasi, President and CEO of Gosnold, agreed with Mr. Walsh. “A detox facility on the Island has been swirling around for a number of years,” he said. “Over the long haul, it’s probably not sustainable.”

Mr. Tamasi also said that opiate addiction requires a different modality of treatment. “With the opiate crisis there’s been a clamor for more [detox] beds. I have a different take on that. If we were building a new health care system, would we focus all the attention on building emergency rooms? Eighty-seven percent of patients admitted to detox in Massachusetts are returning patients; 55 percent have five or more stays in detox. If you had 20 more beds they’d be filled in two weeks. We’re focusing on extended engagement after they leave.”

A pilot intensive outpatient program (IOP) at Gosnold for addicts between 18 and 28 years old is yielding promising results. “There is a 75 percent decline in admissions to detox units, almost complete elimination to hospitals or ER, and no issues with the law,” Mr. Tamasi said. “Detox is only one compartment of care. The biggest challenge is to manage the condition for life.”

Recovery on a small island means many of the recovery groups, and the people in them, overlap. “The recovery community on the Island is very tight,” Jeremy Norton, director of Dukes County community corrections center said. “People who are committed to their recovery tend to look out for each other.”

Two pillars of the Vineyard recovery community are New Paths Recovery Program, the only long-term outpatient facility on the Island, and Vineyard House, the Island’s only sober living facility.

“We’re very fortunate to have programs like New Paths and Vineyard House on the Island,” said Ms. Teagan, who is also a co-founder of Vineyard House, which was established in 1997. “People can live in a completely sober environment at Vineyard House or, depending where they are in their recovery, they can live at home and go to intensive outpatient treatment at New Paths as well as Narcotics Anonymous (NA) or Alcoholics Anonymous (AA).”

Drug testing is a way of life at Vineyard House. As house manager Rick Manning spoke to The Times, he cheerily handed a cup to a resident. “It’s got chemicals at the bottom so drugs and alcohol show up right away,” he explained. “You don’t get three strikes here. If you test positive, you’re out.”
All Vineyard House, residents are required to pay rent, to attend support group meetings, and to participate in house meetings.Mr. Manning became a resident at Vineyard House in April,  2010, after coming back from his fourth detox. As he was being discharged, the counselor told him that his mother had called to say he was not welcome in her home.

“When you lose the respect of your mother, that’s bad,” he said. “When I came back, I knew I wasn’t ready to hit the street, so I got into Vineyard House.”

Now Mr. Manning is a house manager at Vineyard House. He’ll be four and a half years sober on September 15. He’s working steadily and has reestablished ties with his daughter. “I’m proud of my recovery, and I don’t hide my disease from anyone,” he said. “I’ll stand on a rooftop and scream ‘I’m an alcoholic.’ Now people turn to me and I’ve been able to help. That’s a great feeling. Now I can go to functions where alcohol is being served and it doesn’t bother me. That’s a great feeling too.”
Vineyard House is about to expand. Following a successful fundraising campaign, on Monday, May 5, Vineyard House officials and supporters broke ground on the new Vineyard House campus on Short Hill road in Vineyard Haven.
While the future looks bright for Vineyard House, there are clouds on the horizon for New Paths Recovery Program, which operates under the umbrella of Martha’s Vineyard Community Services. New Paths began operation in 2010, funded by a one-time five-year grant from Martha’s Vineyard Hospital. The New Paths IOP program is the first stop for recovering addicts returning to the Island from detox. New Paths also offers other programs for people in various stages of recovery. Since its inception, New Paths has served over 350 recovering addicts on the Vineyard. But now it’s running at a deficit and when the hospital grant ends in December, another $51,000 will be lost from the ledgers.
“The grant from the hospital was finite from the beginning,” Jill De La Hunt, program coordinator at New Paths, said. “Insurance companies were projected to pay for a sizeable part of the cost, but they approve fewer and fewer sessions, and they also required licensed therapists to call them about billing, which takes up a lot of their time.”
Ms. De La Hunt said no one is turned away from New Paths for financial reasons. If someone comes to New Paths without health insurance, a staff member will help them through the application process.
She thinks there is a need for on-Island detox. “A detox facility is a real community need,” she said. “We have people coming to us needing more than we can provide medically. If the numbers don’t support an inpatient detox facility, we could have ambulatory detox and outpatient detox, which was offered here in the past. Some people just don’t have the means to get treatment off Island.”
Although the financial future is uncertain, Ms. De La Hunt remains optimistic that New Paths will continue to serve the Island. “We get all kinds of community support,” she said. “I think that’s the silver lining. We get in-kind donations from businesses and from individuals and that sends the message that the community cares, which is very powerful. The support from the community means people want them to be healthy and want them back.”

For an overview of recovery options to Islanders, call Martha’s Vineyard Hospital, 508-693-0410, and ask for substance abuse counseling.

A full schedule of meetings appears in the Calendar section of The Times. 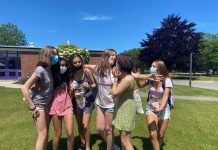 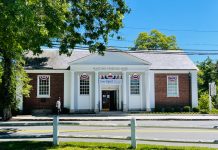 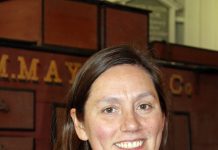