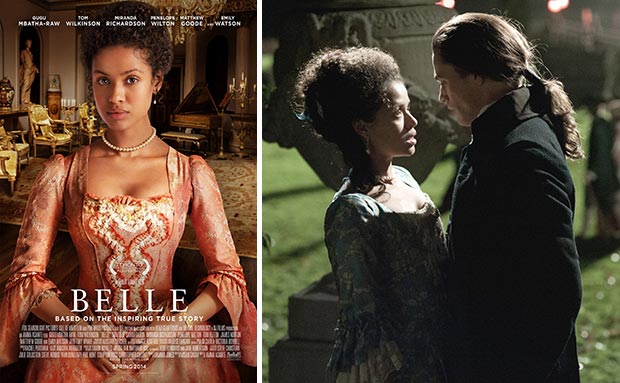 If you are a “Downton Abbey” fan, you will probably love “Belle,” which opens this weekend at the Martha’s Vineyard Film Center. British director Amma Asante’s costume drama is based on the real story of Dido Elizabeth Belle (1761-1804) and set in the 18th century with costumes and settings so lavish and handsome they almost become distracting.

“Belle” offers a far more sophisticated view than “Downton Abbey” of the ways race, class, gender, and legitimacy interacted in England during that era. Viewers meet Dido (Gugu Mbatha-Raw, and played as a mulatto child by Lauren Julien-Box) when her father, a Royal Navy Admiral, picks her up from a London slum and delivers her to his aristocratic aunt, Lady Mansfield (Emily Watson), and uncle, Lord Mansfield (Tom Wilkinson) at their country estate. The couple is already caring for a grand niece, Elizabeth Murray (Sarah Gadon), whose father has remarried. Add to the mix Elizabeth’s peppery spinster aunt, Lady Mary Murray (Penelope Wilton, who plays Isobel Crawley in “Downton Abbey”).

Lord and Lady Mansfield quickly become devoted to “Belle,” who turns into Elizabeth’s bosom (a well-chosen adjective, considering the costumes) buddy. Nevertheless the Mansfields adhere to the era’s conventions and do not permit Belle to dine with the rest of the family because she is an illegitimate mulatto. Belle’s second-class status is offset by a 2,000-pound-a-year inheritance from her father. In contrast, Elizabeth will inherit nothing because of her stepmother.

In the same manner as a Jane Austen novel, much of the plot of “Belle” revolves around finding suitable marital matches for Belle and Elizabeth. But equally important is a legal case that Lord Mansfield, who has achieved the powerful position of Lord Chief Justice, must decide. The case concerns the Zong, a ship full of Black slaves who have been tossed overboard by the ship’s captain on the grounds that there was not enough water for both crew and “cargo.” The ship’s insurers are refusing to pay the owners for the loss of this human cargo, and since England’s economy at the time depended on an active slave trade, the case becomes highly controversial.

The case also provides an opportunity for the movie to show how Dido evolves from a naïve and innocent young woman under the tutelage of her great aunt and uncle into an adult who is directly affected by the controversy. Dido decides to take action and involve herself in the case, and screenwriter Misan Sagay interweaves the film’s romantic motifs with the politics of the legal case. Many critics have, rightly or wrongly, dismissed “Downton Abbey” as costume melodrama; Ms. Asante cannot be accused of trivializing the fascinating story of Dido Elizabeth Belle.