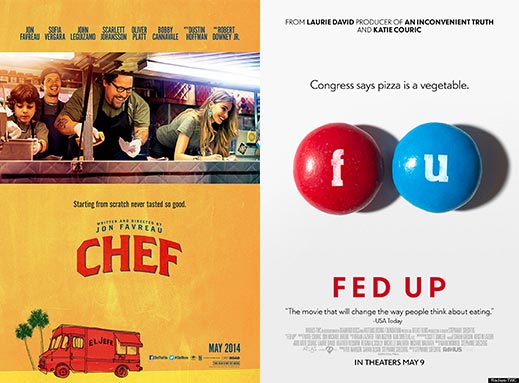 Food is the common theme for two movies opening this weekend at the Martha’s Vineyard Film Center. Jon Favreau’s comedy “Chef” explores the art of making good restaurant food. Director Stephanie Soechtig takes a different tack in her documentary, “Fed Up,” and exposes major abuses in the American food industry. Neither film was available for preview.

Probably best known for his direction of movies in the “Iron Man” franchise, Mr. Favreau takes a starring role as Carl in “Chef,” as well as writing and directing the film. Carl is suffering from a mid-life crisis and loses his job at a trendy Los Angeles restaurant, when his rant against a food critic goes viral on Twitter.

Carl re-invents himself on a cross-country journey with his 10-year-old son Percy (Emjay Anthony) and his cooking pal Martin (John Leguizamo) in the food truck he’s transporting from Miami to L.A. “‘Chef’ is jazzed by the idea of making food and sharing it with others…” writes critic Ty Burr in The Boston Globe.

“Fed Up” in more ways than one

The dark side of the food industry gives “Fed Up” its clout. It was nominated for Sundance’s 2014 Grand Jury Prize for documentaries. TV celebrity Katie Couric narrates the film, which explores the ways in which the federal government colludes with food corporations and helps them addict the public — especially children — to unhealthy processed foods that are laden with sugar. According to “Fed Up,” it doesn’t matter if the sweetener is agave syrup or maltodextrin. Both contribute to the twin epidemics of obesity and diabetes running rampant in the U.S.

Food corporations use the old-fashioned bait-and-switch technique to create enticing fat-free foods by replacing the fat with sugar. Ms. Couric puts the food industry on a par with the tobacco companies, suggesting that food companies, too, should be regulated by the government. The message “Fed Up” delivers is spoken bluntly by Dr. Robert Lustig, professor of Clinical Pediatrics at the University of California/San Francisco: “Sugar is poison.” A panel of nutritionists and health trainers including Jocelyn Martin, Griffin Hughes, Josh and Prudence Levy will answer questions after the screenings of this documentary.