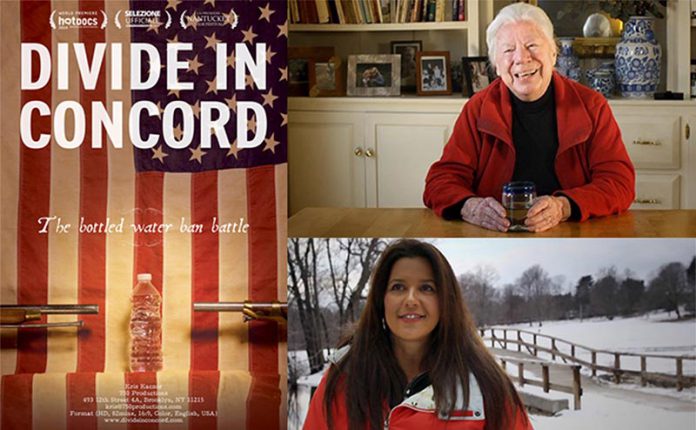 The Martha’s Vineyard Film Festival (TMVFF) opens its summer season on Wednesday, July 2, with a documentary, “Divide in Concord,” about a woman’s campaign to ban bottled water in Concord, Massachusetts. It is the first of 22 films to be shown by TMVFF through Thursday, August 21. The Festival also presents 25 special guests to lead discussions and answer questions, including Rory Kennedy, Katie Couric, Barney Frank, and Henry Louis Gates.

This year the Festival has expanded to screen films in five of the Island’s six towns, and filmgoers will have the option of dinner before many of the films. The popular Cinema Circus program for children will take place at the Chilmark Community Center on Sunday, July 13; at the West Tisbury Library on Sunday, August 3; and at Cottagers Corner in Oak Bluffs on Sunday, August 17.

In “Divide in Concord,” Concord resident Jean Hill learns from her environmentally conscious grandson about the noxious effects of bottled water in single-use plastic containers. In particular, he told her about the Great Pacific Garbage Patch. After her husband died in 2006, she began a campaign to have the town ban single-use bottled water, calling it a chance for a second shot heard round the world. Although the American Revolution actually began in nearby Lexington, Concord has long been associated with the American push for independence.

One of the strengths of “Divide in Concord” is the care director Kris Kaczor takes to develop the pros and cons of the bottled water ban. Residents are given time to make their case in what is a surprisingly complex issue. Why not just add bottled water containers to the other recyclable bottles, asks one opponent. Ms. Hill explains that only 20 percent of water bottles are recycled.

Ms. Hill explores a number of dimensions to the issue: Concord’s association with the American Revolution, the role its town meeting form of government plays in Ms. Hill’s  campaign, and 19th-century environmentalist and Concord resident Henry David Thoreau’s positions. One of the strengths, for instance, of Concord’s town meeting system is that a voter has the right to put an issue on the agenda by collecting as few as 10 signatures. Concord recently passed such an ordinance that allows all residents to dry their clothes outdoors, a practice banned by condominium associations.

“No other community has tried to eliminate a product like this.” said Jill Appel, another Concord resident who joined forces with Ms. Hill. Ninety percent of the garbage in ocean gyres such as the Great Pacific Garbage Patch consists of plastic, which breaks down into tiny fragments that are then ingested by animals and humans. One supporter of the ban collected 1,500 plastic bottles from a single family and built a sculpture. But ban opponent Adriana Cohen calls the proposed article a form of prohibition.

Following “Divide in Concord” is Rory Kennedy’s documentary “Last Days in Vietnam” on Wednesday, July 7. The series will conclude with “Serendipity: The Story of Tony Hinde” on Wednesday, August 21. A complete list of the summer program can be found at tmvff.org.