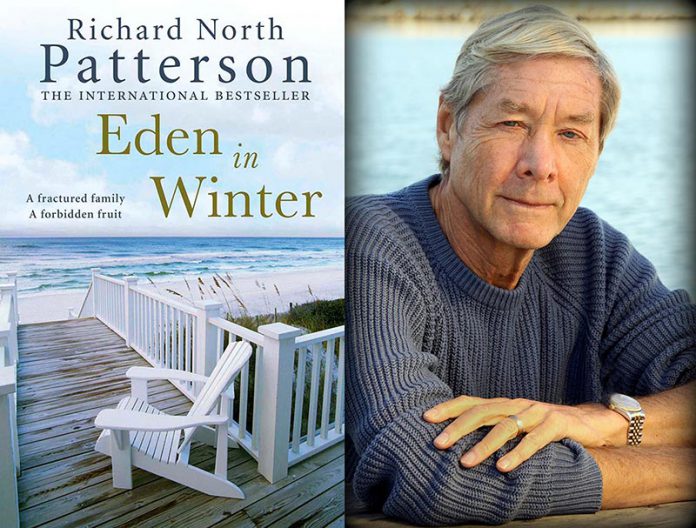 “Eden in Winter” by Richard North Patterson, Quercus, N.Y. and London, July 15, 2014, 620 pages. $26.95 hardcover. Available at Bunch of Grapes in Vineyard Haven and Edgartown Books, and at Island libraries.

Richard North Patterson is not a New York Times best-seller for nothing. In the third and final book about three generations of the Blaine family trilogy on Martha’s Vineyard, Mr. Patterson has produced the best of the series.

The book will work for readers anywhere but has a particular appeal for us because Mr. Patterson, a longtime member of the community, describes this place, its people, and its seasons with particular clarity. Island residents who know this place will nod in recognition. Visitors seeking to know this quirky community will be informed.

Mr. Patterson credits insight drawn from several friends, including Marcia Gay Harden and Drs. Charlie Silberstein and the late great Bill Glazer, both Islanders. In the book’s acknowledgments, the author added a poignant postscript about his friendship with Dr. Glazer, who died in 2013.

Dr. Charlie Glazer is their psychoanalytical alter ego in “Eden in Winter,” and his character not only brings lucidity to an emotional and psychological Armageddon, but he also provides insights for the readers to use in their own lives. Superb writing craftsmanship here.

The critical central character in the trilogy is Ben Blaine, a charismatic swashbuckler, womanizer, and best-selling novelist who has stood tall on the national stage for decades. He is the darling of the Island’s summer celebrity sniffers, an absolute brute and mysteriously dead as the novel opens.

Ben was a 1950s Island kid, born of the Island’s unseen poverty to an alcoholic fisherman and wife-beater. Ben uses his rich friends to get up and out, to Yale and a writing career, with a way stop in 1960s Vietnam, courtesy of Charles Dane, upper-cruster and father of Whitney Dane. Mr. Dane did not appreciate the attentions of this Island urchin to his daughter. He whispered in some well-connected political ears and voila!, Ben was draft bait.

Vietnam fed the fire in his belly and he used it to become rich and famous, living in the Chilmark neighborhood that had spurned him. The twists and turns of his life and those in it continued for decades and generated secrets and accompanying emotional and psychological dysfunction that come to a head when a dying Ben Blaine fell, jumped, or was pushed from a Chilmark promontory to his death on the rocks 80 feet below.

The police and D.A. like the latter theory and launch an inquest into people with a motive, including Ben’s brother; one of Ben’s sons; Ben’s current but estranged blueblood wife; and Carla Pacelli, Ben’s current and pregnant girlfriend, a recent Hollywood mega-star who has come to the Island to recover from the booze and drugs that destroyed her career.

Carla is the most sympathetic character in “Eden in Winter.” Mr. Patterson draws a believable story of her life, based on a childhood that honed her acting skills as she sought approval from a dad who dispensed love like he was throwing a manhole cover — that is to say, infrequently and not very far.

Adam Blaine, Ben’s nominal younger son, had it easy when all this was unfolding. He is a deep-cover CIA operative hunting Al-Qaeda and Taliban leaders in Afghanistan’s mountain regions. He is the only family member not under suspicion because he was 10,000 miles away. The action scenes of his assignments in Afghanistan are as good as it gets in the spy thriller genre. Adam loathed Ben as heartily as the rest of the clan.

Now he returns to the Vineyard for the funeral and immediately determines to defend his family using a variety of covert obstruction of justice methods — the tools of his trade, if you will. The unraveling of all this is the plot of the novel.

That’s where the stuff is. I can imagine Mr. Patterson and Dr. Glazer sitting on the front porch, unraveling the formative experiences of several generations, mapping the emotional landscape of a diverse group of people with an eye to emotional recovery and, dare we say it, coming to peace.

What came out of those meetings and into “Eden in Winter” is fruitful for all of us. While we may not have experienced the dramatic level of events of this novel, all of us wrestle with past and present relationships. You will recognize yourself and others in these characters. In addition to a great read, Mr. Patterson offers us usable insights to recognize our own devils and some methodology to put them to rest.

Hear Richard North Patterson talk about “Eden in Winter” and the Martha’s Vineyard trilogy on Thursday, August 14, from 7:30–9 pm at the Chilmark Community Center as part of the Author Lecture Series hosted by the M.V. Book Festival.