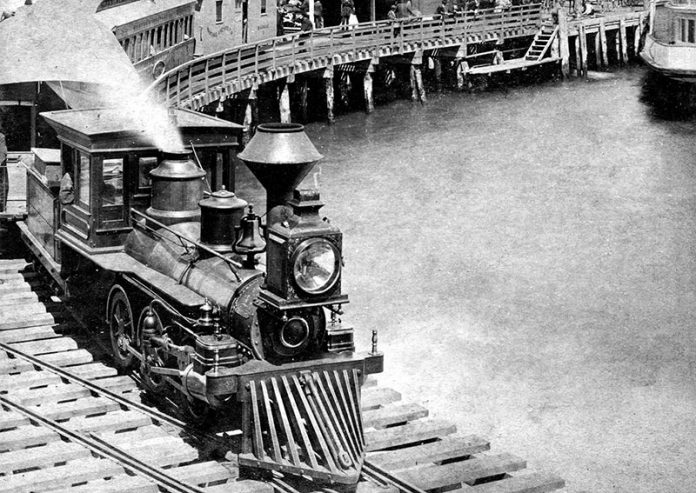 The engine “Active” begins its nine-mile journey to deliver visitors to the Mattakeeset Lodge and to clambakes at South Beach.

In August 1881, a writer for the New York Herald made the following observations from the window of his room at Seaview House:

“They have a railroad here which runs from Oak Bluffs wharf to Katama. The locomotive, all alone in its glory, makes a tremendous amount of noise, wasting a great deal of steam as it snorts and puffs, giving one the notion of a large sea lion anxious to get back to its native element. Here, where all is peace and good will, this turbulent little engine seems entirely out of keeping with the quietness which prevails. In total contrast to the racket created by little Active, the numerous steamboats which touch at the Sea View wharf or Baptist’s Landing often come and go without sound of bell or whistle. Usually the first intimation you have of the arrival of a steamer is a sudden influx of newcomers as they go surging up the avenue toward the city of cottages. Probably the steamers avoid bell and whistle in sheer disgust at the terrible din made by the little railroad demon which, as I write, is drowning every other sound as it shrieks and roars under my window.”

This narrow gauge railroad operated from 1874 until 1895.