A routine traffic stop took a dangerous turn when Leandro Miranda, 23, of Edgartown, tried to flee Oak Bluffs police by taking them on a brief, high speed chase through downtown streets, congested with holiday traffic, on the afternoon of July 4.

“It’s lucky nobody got hurt,” Oak Bluffs police Lieutenant Tim Williamson told The Times. “Any time someone flees it’s a dangerous situation. This was particularly dangerous. There were people everywhere in the downtown area where the chase ended.”

When Detective LaBell and his partner, officer Michael Cotrone, signaled Mr. Miranda to pull over, Mr. Miranda tried to flee, driving at high speeds, at times in the opposite lane, on Masonic Ave. and on Circuit Ave as he headed toward the downtown area, police said.

Police cornered Mr. Miranda when he pulled into the parking lot of Martha’s Vineyard Insurance at 97 Circuit Ave. Mr. Miranda fled on foot and was eventually tackled and handcuffed by officer Petrone.

The police report states Mr. Miranda smelled of alcohol and had two nip bottles in his possession, as well as a partially consumed 12-pack of beer in the car.

“This is the second time he’s decided to flee from police,” Lieutenant Williamson said. In February, Mr. Miranda also led Oak Bluffs police on a high speed chase and was eventually apprehended in Edgartown. “He knows he’s unlicensed and intoxicated and then he puts everybody in jeopardy,” Lieutenant Williamson said. “There’s going to be a litany of charges. We asked for high bail. He got $5,000 and posted it. We requested a dangerousness hearing, but I learned that can’t be done with a motor vehicle offense, so we made a motion to revoke his first bail. We haven’t heard from the court as yet.”

Mr. Miranda has been charged with OUI alcohol, failure to stop for police, resisting arrest, operating after license suspension, destruction of property under $250, negligent operation of a motor vehicle, operating with a suspended registration and marked lanes violation.

The owner of the car, Rogerio J. Almeida, was cited for allowing an unlicensed person to drive his vehicle. This is the third time Mr. Miranda has been arrested while driving Mr. Almeida’s car, police said. 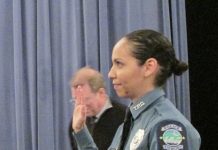