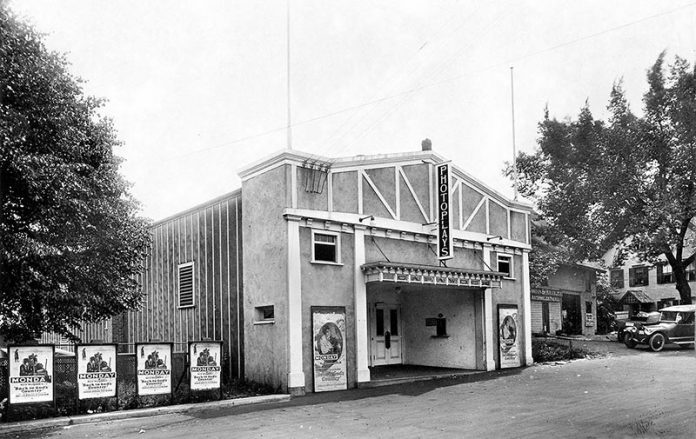 The Capawock Theater, Main Street, Vineyard Haven, circa 1919. This 320-seat theater was built in 1913 on property owned by the SBS grocery store next door. Not to be confused with the popular Capawock Hall on Spring street (a popular turn-of-the-century concert venue), the new Capawock Theatre was built specifically for “small entertainments and lectures.” One of the earliest managers of the Capawock Theatre was Michael J. Keegan of Oak Bluffs, who ran the theatre during the 1920s and 1930s. Keegan was an Irishman, born in Dublin, who came to Martha’s Vineyard to take a job plastering the newly-built Harbor View Hotel in Edgartown. In 1915 he bought the Pastime Theatre in Oak Bluffs, and then renovated the Odd Fellows Hall and renamed it the Strand. Finally, he leased the Capawock Theatre. In 1932 Alfred Hall of Edgartown bought the Capawock and hired Keegan to continue on as manager, and today the theater is owned and operated by Hall’s son, Buzzy. “Back to God’s Country” was a silent Canadian-made melodrama and Arctic adventure starring Nell Shipman. The most financially successful silent film ever made in Canada, it is often credited for having the first nude scene in a major feature film.

Aquinnah: Wouldn’t that be nice?