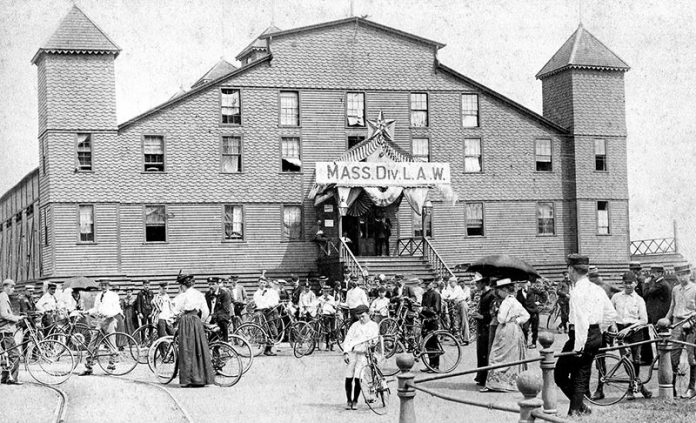 Wheelmen at the Casino

Gathering on an Island once known more for whalemen than bicyclists, the Massachusetts division of the League of American Wheelmen (LAW) mug with their bikes outside the Casino in Cottage City. Each summer during the 1880s and 1890s some 500 bicycle enthusiasts from all over New England gathered here for road racing and coasting contests. “Cottage City has over 40 miles of concrete pavement,” remarked the New York Times in 1894, “and thus affords better wheeling than any city in the country except Washington.” On the back of this photograph is inscribed the phrase “Hickory Hall” — a reference to an Oak Bluffs bicycle establishment run in the early 1890s by Richmond Stoehr, better known by his trick bike riding stage name “Dick Alden,” who may have been the local organizer of this event.

Built originally as a roller skating rink on the corner of Sea View and Oak Bluffs avenues (about where the bank is today), this massive building was retrofitted with a stage and scenery in 1886 and renamed “the Casino” — effectively creating a convention hall worthy of every organization from the LAW to the “Pleasure Seekers’ Social Engagement Club.” On July 4, 1887, 1,500 people (or by some newspaper reports, 5,000 people) gathered at the Casino to hear international religious superstar Rev. Dr. DeWitt Talmage of Brooklyn give his oration, while “profuse decorations of flags, banners, and Chinese lanterns swayed in the breeze.”

The Casino burned down in September 1892, together with the Sea View Hotel and a number of other neighboring buildings. “A southwest wind is all that saved the town” reported the papers. The LAW still exists today as the League of American Bicyclists.