On Saturday, August 9, Dana Gaines will paddle counterclockwise around Martha’s Vineyard to raise money for moving the Gay Head Light.

Excerpted from Mr. Gaines’ training blog on “Full Circle for the Gay Head Light” at gayheadlight.org.

Monday, August 4 — With five days to go, I decided to catch the early ebb current this morning from Lake Tashmoo down the Sound to finish off the Aquinnah cliffs — mainly to gauge the effect of the current against a very light SW headwind. From the Tashmoo jetties I bore north of west towards Tarpaulin Cove on Naushon, in order to move further out into Vineyard Sound; as expected, once a half-mile offshore I began to see the effect of the current on the GPS, as it ticked upwards of 6 mph, then 6.5, 6.7 and higher,  eventually settling at 6.9-7 mph for the stretch from Cedar Tree Neck to Menemsha Hills; it decreased measurably off Menemsha Bight, but recovered to 6.4 for the final three miles to the Cliffs. Still, it was nothing like the 2.5 knots shown in the Tide Book, which must be due to a weak phase of the moon.

This also gave me the opportunity to survey the waters off the cliffs in bright daylight, and decide to stay well offshore, rather than risk hitting any submerged rocks, of which there are dozens, if not hundreds. I spotted one large half-tide rock far offshore of the Aquinnah Shop restaurant atop the cliffs, moved 100 yards further offshore from that, and marked the waypoint on the GPS; this will serve as the location of the Start/Finish line buoy. It’s wide open to the Atlantic, so I just have to hope the seas aren’t too chaotic there this coming Saturday afternoon; it’s not likely that I’ll see conditions nearly as calm as this morning,  but I can dream, I guess!

I then paddled back to Menemsha, on the way checking the distance from my launch site to the Start —  exactly one mile. Here’s hoping when I paddle that mile in near darkness on Saturday morning both the wind and the seas are moderate-to-calm! Tashmoo jetties to Cliffs, 14:06 miles, average speed 6.6 mph, maximum 8.5, in 2:08; total trip 19.4 miles in 3:05. That’s it for long workouts;  time to rest, “taper,” hydrate, and attend to the many small details so Saturday’s trip can go off smoothly.

The long range forecast is for a beautiful day on Saturday, with fairly light north winds; unless the forecast changes with higher wind speeds, I’ll do the course counter-clockwise, starting at 5:30AM and aiming to reach Cape Poge (the half-way point) by 10…. that should put me passing East Chop around 11:30 am, West Chop around noon (give or take a half-hour)…. I’ll pick up the fair ebb current at West Chop and thereafter have it with me the whole way down the Sound for the Cliffs. This is, of course, all theoretical; there are many variables which might slow down or— preferably— speed up progress…. but all of my training to date makes that timeline realistic.

In closing, a huge thanks to my good friend Tim Wolff for all his shuttle and livery services; I could not have done all these distance paddles without Tim’s willingness to get up early, drop me off and pick me up at various harbors around the Island!

Twitter (TheGHLight). The Indiegogo campaign, (indiegogo.com/projects/full-circle-for-the-gay-head-light/ ) runs until August 15th. Donations for the lighthouse fund can be made on our contributions page any time, at gayheadlight.org. The Save the Light Committee is hosting a finish line party at the Aquinnah Shop Restaurant atop the cliffs, fom 3 to 5 Saturday afternoon. Despite the pressure of this deadline, Mr. Gaines feels safe in saying he will arrive at the finish line within this time frame. 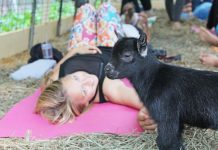 Trending on the farm: Goat yoga 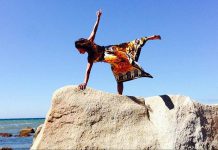 Your body, your pharmacy

On My Mind: How do I deal with seasonal depression?