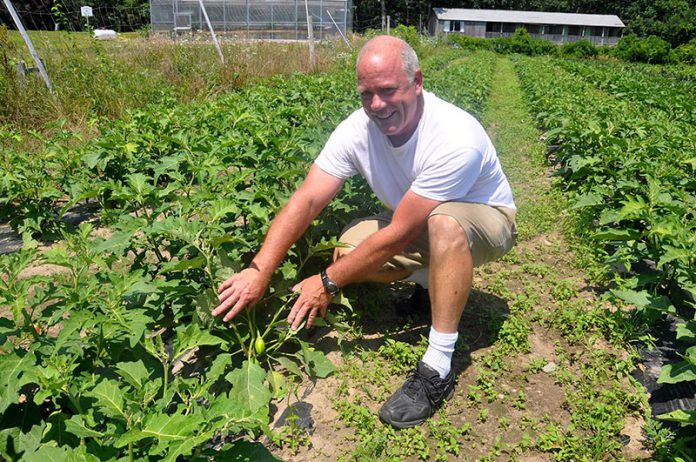 An increase in the number of farms and farmers on Martha’s Vineyard has meant an increasing variety of produce available at farmstands and markets across the Island. In a series of profiles, The Times introduces the men and women who work the earth. This week we talked to Jamie Norton, owner of Norton Farm, on the east side of Edgartown-Vineyard Haven road, on the Oak Bluffs town line. Owners Jamie and Dianne Norton are both teachers at the Martha’s Vineyard Regional High School. They spend their summers farming this lush 50-acre farm, which has been in Jamie’s family since 1837. Norton Farm produces a wide variety of vegetables all summer long, including peas, beans, tomatoes, eggplant, jilo, basil, cucumbers, salad greens, and an array of squashes.

How did you first get into farming?

I first got into farming back when I was in second grade; that was when my father inherited the land from his father. My dad was a college professor at that time — he was chairman of the department of religion at the College of Wooster in Ohio. He taught a course on Gandhi that was a required course for all incoming freshmen. When he inherited the land, the property tax on the land was more than his salary as a professor. But, that was when Massachusetts started chapter 61A, which means that if you farm the land, it gets taxed at the farm value, not the potential value for development. By doing that we were able to keep the land — we farm it so we can keep it. My dad always used to say that what he was saving in taxes was what he considered his salary.

The farm never makes money; we do it for love and so that we can keep it and conserve the land. That’s why my wife Dianne and I are both teachers. Farming is our hobby. And we do it now for our kids, so that they can grow up on the farm and see it and appreciate it. That’s also why we do it with sustainable growing practices — we don’t say organic only because it’s too much paperwork. We follow all of the organic practices, but there’s no extra time — it’s hard enough to actually do all of the farming! We’re doing it for love — not for the label, so we tell our customers that sustainably grown means organic, without the ‘O-word.’

What are you growing this month?

At the beginning of this month we finished the pea season. The peas are a big crop for us — when I went to college, peas paid for my college. But now, peas are over, so we’re just getting into tomato season. The cherry tomatoes, people come in and eat like candy. It’s funny because customers say, “Oh no, I don’t like tomatoes,” and we say, “Oh, just try one,” and all of a sudden they buy a pint, and the next day they’re back for another, and they eat them all on the ride home — and these are people that think they don’t like tomatoes!

Today was our first jilo harvest. Jilo is Brazilian Eggplant, which we started growing back in 2004, so we’ve been growing it since before it became popular to grow ethnic foods. We harvest it every Friday, and our customers line up every Friday at 9 am, because after that we’re sold out for the week.

Are there certain recipes that make it so popular?

Well that’s the odd thing, I don’t like it — it’s very bitter. The Brazilians like it when its not ripe — so it’s not sweet yet. When it ripens it turns from green to orange, and people from Portugal like it when it’s orange and make a preserve out of it. Our customers tend to like it green, so that’s when we harvest it.

Tomatoes are coming in big, and in another week we’ll be harvesting beans. When people drive by they’ll see white netting — thats not deer fencing, that’s netting for the beans to trellis on — to grow on. We’re also growing squash and lettuce. One of our big products has always been our mixed greens, which we sell by the bag. And eggplant is starting to come in heavy now. We’re growing white and the traditional purple, and the Asian eggplants, which are longer — they almost resemble bananas in shape. Peppers aren’t here yet, but they’ll be coming in soon as well.

Do you have a favorite part or phase of your farming?

I like taking care of the animals. Every morning I wake up at 5:30 and open the chickens’ door and feed the sheep. And then at night put the chickens back in. I collect the eggs every day. I like the animals, they’re fun. I’ve got ten sheep, and about 200 laying chickens — 100 are three years old — and still laying, and 100 were born February first, and they’re just starting to lay now, so we’ll have more eggs in the next few weeks.

The sheep have seven acres of waterfront property on the Lagoon. We use the sheep for wool — every Memorial Day Andy Rice comes down from Vermont, and he shears the Island, he does everyone. You have to have 60 pounds of fleece to be processed, so I wait and send it all in every four years, and they process it and send it back as yarn, which we also sell.

What do you do with the farm in the winter?

I don’t do a much farming in the winter because of the demands of teaching. I don’t put it to bed as well as I would like to be able to, but you know.

What do you think the biggest challenge of farming on the Vineyard is?

The biggest challenge of farming on Martha’s Vineyard is making enough money to pay taxes, and to pay the workers — that’s one of the hardest things for us. We built a bunkhouse in 1987 and they trade a week’s lodging for 16 hours of work, which is great for the farm, but this year we only have one person utilizing the bunk house. And it’s a shame because so much of a college student’s salary that would otherwise go towards paying rent, could be saved for tuition!

How do you choose seed?

I grow pretty much the same crops every year — except for some crops like broccoli which I don’t grow anymore because the bugs are too hard on it and the effort isn’t worth the yield. But we try to grow what people want. And what doesn’t attract too many bugs. We don’t grow corn for that reason. Morning Glory grows great corn — we like to get corn from them but don’t grow it.

When I was younger we used to spend two hours every morning weeding the corn, and then when it came time to harvest it, we’d get about 12 bushels of corn for the whole summer. And the corn would be half wormy. I remember having to make up excuses like, “Oh, they’re just protein,” for customers, and I decided I don’t want to do that, so we stopped growing corn.

What have you been working on today?

Today I’ve been changing all of the tines on the tractor. They start off about 3 inches, and after two seasons of our sandy soil, they’re about half an inch long and razor sharp!

Guess what’s going up on the other side? “Hentrance!” Carol Ramsey, who used to be an English teacher at the high school, came up with Eggs-it, and then a customer came in and said, “Well, if you’ve got eggs-it there, you’ve gotta have a hentrance!”

For more information, visit the farm, check out Norton Farm’s website, at marthasvineyardfarm.com, or call 508-696-5989.