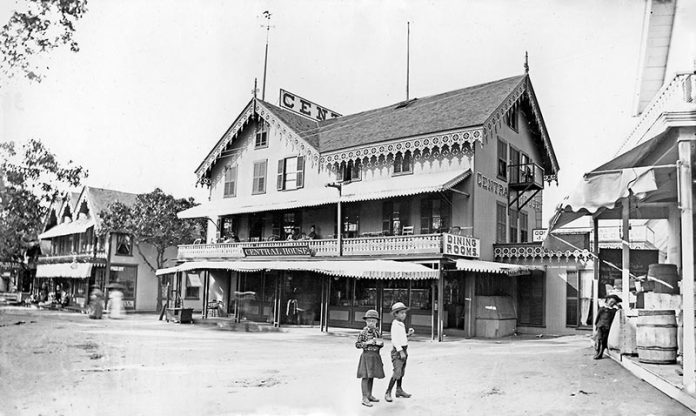 Central House was once one of the grand summer boarding houses of the Campground — with 60 rooms, a large dining room, and an attached bakery, it was the largest commercial building on Camp Meeting Association property and one of the oldest hotels in Oak Bluffs. It was located on Montgomery Square, behind Circuit Avenue’s Arcade building.

President Ulysses S. Grant dined at Central House during his famous visit in 1874. The plain, unfinished-looking dining room had long tables seating rows of a dozen or more people in hard seats on either side. But it was also remembered for its excellent meals and friendly staff.

Renamed “Beatrice House” around the turn of the 20th century, Central House was finally razed in 1957, and the scrap wood used to build fish houses and other buildings at Menemsha Creek. The Everett House, visible on the left, was also razed. The lots were converted into a parking lot, which remains today.