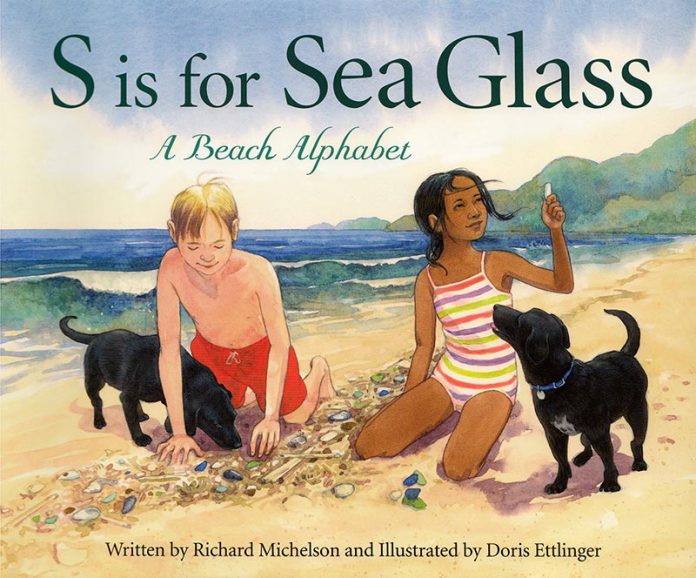 Award-winning poet and children’s book writer Richard Michelson combines his writing talents in a new children’s book, “S is for Sea Glass,” written in a variety of poetic forms. New Jersey-based illustrator Doris Ettlinger draws on her experiences at Cedar Grove Beach Club in Staten Island, N.Y., where she grew up, for her colorful watercolors and mixed media images of children, dogs, and marine life celebrating sand and ocean.

The current poet laureate of Northampton, where he resides in the off season, Mr. Michelson dedicates his new book to the Martha’s Vineyard Camp Meeting Association’s year-rounders and summer residents. He and his wife, Jennifer, summer at their cottage in the Campground with their dog, Mollie. In both his poetry and his children’s books, the author has built a reputation for writing about social issues.

His most recent children’s books include “Twice as Good: The Story of William Powell and Clearview, The Only Golf Course Designed, Built, and Owned by an African American,” (2012); and “Lipman Pike: America’s First Home Run King” (2011), about a young Jewish New Yorker who became a baseball champion in the mid-19th century.

Although “S is for Sea Glass” primarily celebrates the joys of living and playing at the edge of the sea, Mr. Michelson’s distinctive style shines through in a number of ways. His marine alphabet includes off-season as well as summertime activities. The letter “I” stands for ice, where the author hails waves, that “like waiters, keep bringing ice cubes to the shore/Which looks like a magical ice castle floor.” Shells find their way into this beach alphabet through the letter “E,” which stands for empty shells. “If you display your shells with pride/Remember mollusks lived inside,” Mr. Michelson suggests.

He taps his skills as a poet by employing a variety of different poetic forms. “P is for Pail” is written in traditional three-line, five-seven-five-syllable haiku form:

Stay still when I approach. Oh!

My shovel and pail.

Sometimes his alphabet poems rhyme, as in “K is for Kite:”

Today we have gone fishing. Dad’s excited, so am I.

He’s angling in the ocean. Me? I’m fishing in the sky.

In “O is for Ocean,” Mr. Michelson launches into an ode:

O the ocean is full of emotion.

What are waves but its hopes and its fears?

By creating an alphabet of poems, the author has produced a children’s book that asks to be read out loud together by parents and children. And Ms. Ettlinger aptly captures the spirit of this Vineyard writer with designs that aptly comment on the subjects of the verses.