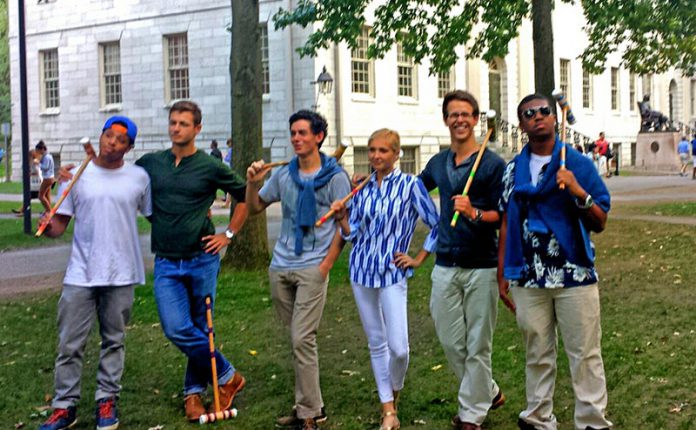 We launched the After 18 series last fall, with a group of 2013 graduates who sent regular dispatches about their experiences in college, work, or travel. This year, we begin again with graduates from the class of 2014. We’re hearing first from Nathaniel Brooks Horwitz, a recent graduate of Martha’s Vineyard Regional High School and a freshman at Harvard University. Nathaniel was an intern in the newsroom at The Times for eight months, and had been at Harvard (where he will be studying molecular biochemistry) for three days when he filed this dispatch.

“She’s skating in the next Olympics,” said one of the girls seated in the circle, pointing across the Yard at another incoming freshman. “And she’s performed piano in Carnegie Hall three times.” Other members of the circle murmured approval. One boy, a champion rower, added that this same prodigy had spent her summer in a prestigious Cambridge lab, working on cellular transport channels.

Throughout high school I had heard of these wunderkinds: seemingly mythical peers, out there, somewhere, conquering the world. Now, surrounded by them, I felt honored, but at the same time, intimidated. The boy on my left won the international science fair, twice. On my right, a girl from India, also on her way to the Olympics (for shooting).

Me? I write pretty sometimes.

I expected that. And I expect it will intensify when classes start in a few days, packed with some of the world’s sharpest students. What I didn’t anticipate was the diversity. In that circle of 11 incoming freshman in Harvard Yard, several are on full, financial, need-based scholarships; five are foreign citizens; and only two are white males. Those numbers hold roughly true across the entire class of almost 2,000. This is an astounding achievement in a country where 30 years ago higher education was dominated by rich, white, almost-always-Christian men.

I also didn’t comprehend the effect of social media on my incoming class. Instead of entering a campus full of strangers, like my parents or even freshmen from five years ago had done, I was met by dozens of students from all over the world who I had messaged or Skyped with regularly since December, students who I already considered friends before we had even met in person.

Five of us got frozen yogurt tonight (three ounces free with a student ID!) and sat in a courtyard just beyond the gates of the college. We listened to a street guitarist playing Bob Dylan and squeezed onto a bench beneath an array of mellow lighting. No one mentioned their international accolades or aid work or perfect SAT scores. Instead we noted the premature chill of the air and laughed again at jokes made months before, when we were still thousands of miles apart. Now together, we appreciated the momentary perfection: a few friends united for the first time, enjoying a simple, beautiful evening.