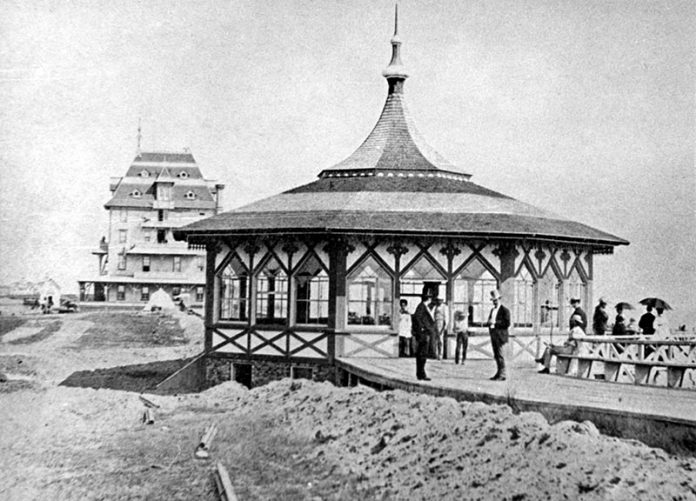 A scenic “plank walk” once stretched a half-mile atop the bluffs along Sea View Avenue from the steamer wharf to Waban Park in Oak Bluffs. The jewel at its center, across from Ocean Park, was this octagonal pavilion built in the early 1870s to resemble a Chinese pagoda. Known simply as “the Pagoda,” it was a see-and-be-seen destination for both tourists and the high-society of summertime Cottage City. Sometimes referred to as a restaurant, it was really more of a fashionable summertime refreshment stand. Customers were served at the octagonal-shaped counter at its center, and could sit at tables inside to have a drink and enjoy panoramic views of Nantucket Sound. A set of stairs led to the bottom floor which opened up to the beach.

The Pagoda, together with the grand Sea View Hotel visible in the distance, were both designed by architect Samuel Freeman Pratt of Boston. He designed some 22 buildings in Oak Bluffs in just a few short years, from private homes to the Arcade on Circuit Avenue, but his octagonal sensibilities manifested themselves again in his design of a well-known surviving landmark, the historic eight-sided Union Chapel.