Before you bite into your next breakfast, do you know where it’s been? I’m not talking about your cook’s loose interpretation of the five-second rule. Nor am I suggesting that your food once shook hands with a molecule of gluten (for shame!) and didn’t wash. I won’t even discuss the farm whence your eggs came, and whether or not that farmer’s neighbor allowed the chickens to play in his yard. I’m talking about the metaphorical “been.” The big been. As in, does your meal have a history, a backstory, a name worthy of something other than “eggs and bacon”? If you’re eating at an Island restaurant, the Magic 8 Ball says: “Outlook good.”

Sure, there’re plenty of restaurants on Martha’s Vineyard where you can order eggs and bacon. Or two eggs and two strips of bacon, and so forth in various numerical increments. But this is a land of artists, and writers, and creative types who shun the straightforward. At many Island restaurants, you may have to read the fine print to know just what it is you’re ordering. There are a lot of geographical locations on the menu: Chops and Beaches and Katamas (which almost always have avocado — whether or not there’s a reason for that, Magic 8 Ball says: “Better not tell you now”).

The menu names get even weirder, but if you want to know why, the 8 Ball won’t tell you. Yes, there is a limit to everything, even omniscience. You’ll have to ask the cooks.

Biscuits in Oak Bluffs generally favors the straightforward menu items, until you scroll down and reach “The Stormin’ Norman” omelette. Owner Chris Arcudi says he named the menu item after a hyperactive childhood friend. “He was always storming around, so I called him Stormin’ Norman. I wanted to name a dish after him, and it has all the things he likes: bacon, ham, sausage, and onion.” ($7.99.*)

The Art Cliff Diner in Vineyard Haven has a few quirky names on its menu, but most of them are coded to the ingredients inside. The Smokin’ in the Shower, for instance, is a toasted bagel with smoked (get it?) salmon, red onion, tomato, cream cheese, capers, and a shower of lemon. ($10.50.)

Some menu items on the Vineyard have been around so long that the staff can’t remember exactly why they are called what they are called. Nadine Barrett, a server at Linda Jean’s, can confirm that the “Jacob” was named after one of the cook’s kids “back in the day when Linda Jean’s first opened. He would come in here and eat home fries with onion, tomato, broccoli, spinach and cheddar cheese all the time.” ($7.99.) The “Sampson” (two pancakes, two eggs & two sausage patties, $9.99) she wasn’t so sure about, but she believes it was the name of someone’s pet. “We’ve had a lot of menu items named after beloved animals and pets,” she said.

Jeffrey Hefflin, fondly known by his staff as “Heff,” has been a cook at the Black Dog Tavern since 1986. He can remember the stories behind most of the menu items because he named them himself. After a stint in the military, Heff came to the Island to teach, but found himself drawn instead to a little shack called the Black Dog. “I saw the last of the old hippie days here. Back in the day we used to have stereo wars over Grateful Dead and Jimi Hendrix vs. punk rock.” Those days live on in the “Are You Experienced?” omelette with asparagus, mushrooms, and cheese. (Grass and shrooms are kitchenspeak for asparagus and mushrooms, respectively.) “They’d never let us play that type of music now,” Heff says, but he still gets to have an awful lot of fun with the menu. Here are a few of his favorites:

Wait, I’m sensing a theme here, Heff. Just how do you get your name on the Black Dog breakfast menu? “It’s usually something you’re not real proud of,” he admits. The menu is a way to immortalize the stories surrounding Black Dog customers and staff, a way to make sure what happens on Martha’s Vineyard stays — forever commemorated — on Martha’s Vineyard. Then sometimes, they just paint a funny picture.

Heff himself has made the breakfast menu hall of fame, twice, for his love/hate relationship with the morning shift.

The next time you come across a funky name on a breakfast menu, don’t pass it over in favor of a list of ingredients. Ask your waiter. You might hear a funny story. And if you’re ordering from any of the above restaurants, you’ll surely get a breakfast that lives up to its name.

*Some menu items are specials, and their prices and contents are subject to change. 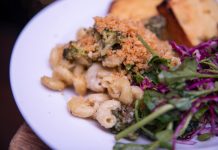 The Roadhouse comes to the Ritz 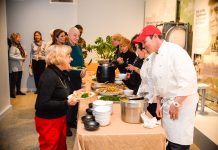