Ten short films from around the world will play at the M.V. Film Center on Friday, Sept. 26, Saturday, Sept. 27, and Sunday, Sept. 28, as part of the 17th annual Manhattan Short Film Festival. Vineyard filmgoers, along with others in more than 250 movie theatres on six continents, will have the chance to vote for their favorite short and their favorite actor.

Combining live action, animation, and special effects, the finalists were drawn from 589 entries and 47 nations. A breeding ground for cinematic success, the Manhattan Short Film Festival has produced Oscar nominees and winners as well as other international prizewinners.

From the Netherlands, director Ben Brand tells a particularly topical story in “97 Percent.” The central character chases a would-be romantic interest through his smartphone. American directors Alix Lambert and Sam Chou employ animation for their powerful graphic novel–style, episodic documentary “Crime — The Animated Story.” Ms. Lambert has already directed a full-length documentary on Russian prisons and written a book on crime. “We wanted each episode to showcase a completely different visual style to complement the stories being told,” Mr. Chou said in an interview with Manhattan Short founding director Nicholas Mason.

“On the Bridge,” an English finalist by Sameer Patel, develops an original premise derived from an actual event that took place on Waterloo Bridge in London. One man sees another getting ready to jump off the bridge and assumes he is trying to commit suicide. The reality is shockingly different, and offers a fascinating exploration of courage.

Australian director James Croke’s “Shift” revolves around an inventor who develops a device that allows him to vanish from one location, then reappear in another. “The Fall,” by Norwegian director Andreas Thaulow, uses the visually potent premise of mountain climbers to narrate its story comparing two kinds of trust, between climbers and between lovers. “We had an experienced crew of climbers and experts in charge of safety,” Mr. Thaulow has said. “The trickiest part was to get the equipment safely to where it needed to be.”

Outer space provides the setting for French director Thierry Lorenzi’s film “ON/OFF.” “[Science fiction writer] Philip K. Dick is one of my influences,” he said. “I wanted ‘ON/OFF’ to feel like a science fiction novella.” The film was shot in a studio, and the director uses special effects to create the illusion of outer space. “La Carnada,” the Mexican entry by director Josh Soskin, addresses the hot-button topic of immigration. Although it’s a fiction film, the director based the film on his time living and traveling in Mexico since 2008. Shot on both sides of the border in Tijuana and Sonora, “La Carnada” uses the perspective of a teenager to narrate its story about immigration and smuggling.

“Mend and Make Do,” another finalist from England by director Bexie Bush, combines animation and live action for its interview of one of the elderly women who were clients in Ms. Bush’s grandmother’s hairdressing salon. Describing life before and after World War II, Ms. Bush said, “Lyn Schofield was one of my favorite customers, who would burst through the door every Tuesday exclaiming, ‘I’m here’ in a tuneful announcement with a giant smile on her face.”

A mother’s encounter in an elevator with two U.S. Army officers in “The Bravest, the Boldest” provides the theme of American director Moon Molson’s short. The news these officers have come to deliver is not something any mother would want to hear. The director evokes the setting in a New York’s housing project with shadowy tones of yellow, orange, and green. “Rhino Full Throttle,” the title of German director Erik Schmitt’s entry, reflects its use of magical-realist production values to explore a man’s romantic encounter with a mysterious young woman in his search for the soul of a city. Mr. Schmitt’s walks in Berlin provided the foundation for this unusual tale. He explains that he and a friend developed a variety of analog film tricks like stop-motion, pixilation, and playing with perspectives to convey his emotional story. 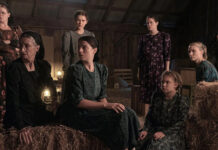 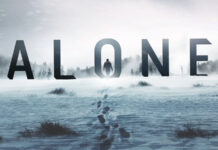 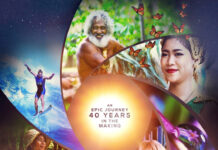