There are some unmistakable signs that it is Derby time on Martha’s Vineyard. Every fifth vehicle has a fishing rod on top, whether the driver likes to fish or not. There was a fight on the Menemsha jetty. And my boat and trailer moved out of the driveway, and it was not due to a tsunami.

On Saturday, overcome with guilt at the sight of pine needles building up inside the hull of my Tashmoo 18, and with the knowledge that the forecast called for about as perfect a fall day as one could want, I hooked up my boat and drove to the Lagoon Pond launch ramp. It was early, but  there were only two parking spots left.

My plan was to look for false albacore or bonito, then drift an eel or two for striped bass or bluefish. I recognized it was an overly ambitious plan, but I have always been unrealistic about the Derby and what I can actually accomplish in the span of one day, which accounts for why my wife no longer makes dinner plans, or any plans for that matter, that include my actual participation.

It was flat calm, and I made good time, pushed by my 30-horsepower Evinrude, a rope-start, two-stroke 20-year-old outboard that is probably responsible for thawing some polar bear’s ice floe but remains quite dependable. A knot of about a dozen boats lay off the entrance to Tashmoo. A group of albies broke near David Thompson, fly-fishing from his canoe. The flotilla converged on him, and I remembered why I do not like fishing for albies.

The school popped up about 100 yards away and the flotilla moved, some boats faster and less considerate than others. The more considerate fishermen will defer to fishermen in the boat closest to the breaking fish so they get a good shot. The less considerate just hit the throttle unmindful of anyone in their way.

I decided that that fishing was not for me, and I left in search of more fish and fewer fishermen. I went across Vineyard Sound to see if there were any fish in Lackeys Bay between Naushon and Nonamesset, just to the west of Woods Hole, an occasional hot spot. As I approached, I could see birds working over breaking fish. There was only one boat in the bay, a wooden skiff. My first assumption was bluefish, but to my surprise they were albies. Other fish broke. There were pods of fish all around.

I was quite pleased that my hunch had paid off. More than 30 casts later with a metal jig and without a strike, it was beginning to seem academic. A small group of boats fishing albies off Nonamesset were moving with even more albies in my direction with the falling tide. The fish came up and went down. I cast and I cast.

The popular definition of insanity is: doing the same thing over and over again and expecting different results. How, I thought, is that different from fishing for albies? So by definition, Derby albie fishermen are insane, which explains the story I heard about a fight on Menemsha jetty, where the fishing is often elbow-to-elbow when the albies are running through the channel.

What I heard — and whether it is true or not, it sounds like it could be true — is that a guy showed up to fish and found his employee, who was supposed to be working, on the jetty. The boss tossed his employee in the water and then the employee threw the boss in the water, and in between it all some punches were thrown and some fish were caught, or not.

Acknowledging my own slide to insanity, I decided a change to a lighter leader and a different lure was called for, so I tied on a 10-pound fluorocarbon leader and a small, green-striped, jointed minnow.

The fish had begun to move with the current, and I moved closer to a group of six boats where fishermen were casting without success to breaking fish. A pod of fish began thrashing the water. I cast into the middle and felt an albie take the plug. It was the first albie I had hooked in years, and I remembered why the quest for these mini-tuna becomes an addiction.

The fish went down, it went out, it swam so fast back in my direction that for a moment I thought it had come off the hook. It swam around the boat and I stumbled around my center console. Out of the corner of my eye I saw a boat.

It was one of those ultra-speedboats good for nothing but racing from a bar in Falmouth harbor to a bar in Oak Bluffs. The bozo at the helm was heading right though the cluster of drifting boats and albies. My guess is the engine noise on those things gives anyone in the boat a concussion. I suppose the only benefit is that he could not hear anything the woman standing next to him was saying (Like my nails, honey?) and she could not hear anything he had to say (Should I shave my chest, honey?).

The guy cruised right past me, saw I had a fish on, and waved. Honest. Got to be the concussion.

His wake hit my stern and set me to rocking as I continued to battle my fish and brought it to my net. The fish was not particularly big. I tossed it like a torpedo back into the water. And I left, more than content and not willing to make one more cast and confirm the Derby diagnosis. 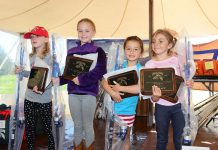 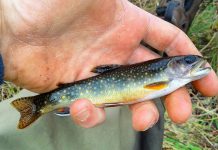 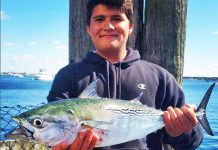