The fifth annual Local Wild Food Challenge took place on Columbus Day afternoon at the Martha’s Vineyard Rod and Gun Club in Edgartown. Against the backdrop of Sengekontacket pond, amateur and professional chefs prepared dishes containing one or more native ingredients for evaluation by two separate judging panels. Scores of enthusiastic Islanders attended the event, staying well into the night to enjoy samples of the competitors’ creations.

Tyler Gibson took the grand prize for his “Around the Island” dish which was comprised of ingredients taken from all six Vineyard towns: bacon fat seared bonito, torched oysters and baby scallops with a clam chowder-like sauce, pickled Jerusalem artichoke and watercress salad with pea shoots, and muddled autumn olive steeped in Champagne.

In addition to the wild food creations, Josh Aronie’s popular taco hut was in full operation. Another vendor was Peak Organic Brewing Company of Vermont.

“For us, local fresh ingredients are what make Peak beers great and that’s what this event is all about,” Tabatha Stephens, Territory Manager for Peak Organic said. “Plus we love the Vineyard. It was such a great turnout. We’ll be back next year for sure.”

Seven-year-old Quinlan Slavin of Chilmark (who’s been cooking since he was three) earned runner-up in the kids’ division for his dish of Grey Barn pork belly with an autumn olive, honey, and grape sauce. Quinlan said that the highlight of the event was seeing several top Island chefs crafting right beside him. “Watching the other chefs prepare their dishes was my favorite part,” he said.

For Quinlan’s dad, Sean Slavin, watching his son confidently cooking on his own was something special. “I was very proud of how Quinlan handled himself at the Wild Food Challenge,” he said. “He wasn’t intimidated standing in between some of the best chefs on the Island. I was so grateful to all the Chefs that took the time to welcome Quinlan and really show interest in what he was cooking. Kevin Crowell of Detente and John Forti (heirloom gardener) in particular were very gracious, but everyone was great.”

Sarah and Bill Manson, the founders of Local Wild Food Challenge, were pleased at how it turned out. “This year’s event was a roaring success,” the Mansons wrote in an email to The Times. “We had nearly 50 entries and hundreds of spectators. The resourcefulness of the local Vineyarders impresses us more every year. The quality and presentation of the dishes is truly amazing. With the growing popularity of the event, we’re already planning next year’s M.V. Challenge. We’re looking to improve the flow and interactive experiences of cooking, tasting, and food education.”

The winners of the Wild Food Challenge:

Hayley Knowlton: Best Use of a Local Ingredient

Kayla Leonard and Caitlin Crossland: Best from the Land

Deborah Webb: Best from the Water

Michelle Cowart: Best on the Wing

Positive cases of COVID-19 stay at 11 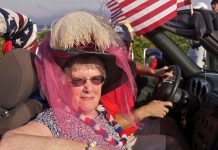 Positive cases of COVID-19 stay at 11

This Was Then: Last days of Lane’s Block

Meeting the challenge of COVID-19 as a community