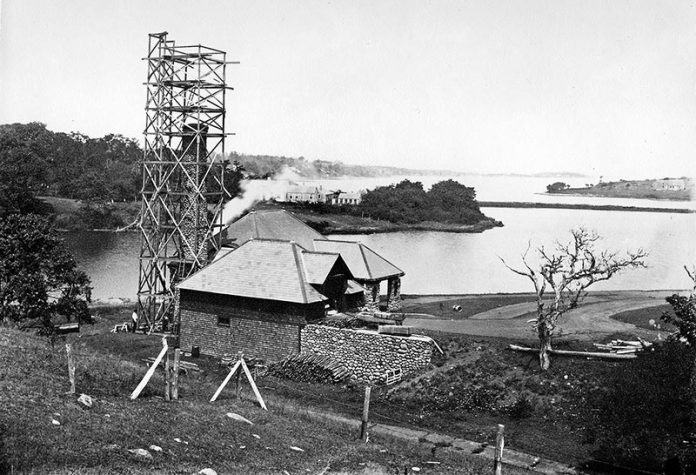 Built by the Cottage City Water Company in 1890, the pumping station at the head of the Lagoon draws clean water from what was then known as Beech Grove Spring and pumps it to the iron standpipe en route to town. In 1897 the station reportedly fed nearly 13 miles of mains and supplied water to 488 taps and 65 hydrants throughout Oak Bluffs. The corporation behind the company was a loose group of local entrepreneurs, wealthy summer residents, and professionals such as William Wheeler and Charles Parks, whose firm had built 14 similar waterworks from Maine to Florida.

A few weeks after the station opened, the Boston Globe dutifully (if skeptically) reported this colorful tale: “A story (which may be more or less legendary) is told of this never-failing spring similar to the one regarding the discovery of Poland spring, which is that a farmer had a sick cow among his herd in the pasture near where this water bubbled from the ground. This wise old cow took to drinking the beverage freely, and found it one of the “greatest medical discoveries.” She was cured of her malady, whatever it might have been, and the water has been analyzed by experts and pronounced of the purest quality and declared to contain valuable medicinal properties. It would seem a fitting tribute to those Christopher Columbus-like cows of Poland and Vineyard Highlands to call them the cows which gave the golden milk.

The local mastermind behind this project was Zenas Dillingham Linton of Cottage City, who had retired from maritime life to become an Island grocer. He served not only as president of the Cottage City Water Company but also as the Cottage City town treasurer. It was not until he retired to Sailors’ Snug Harbor, an off-Island retirement home for merchant seamen, that it was discovered that some $11,000 had gone missing from town funds under his watch. He was arrested, together with former selectman Edmund Eldridge who was his nephew by marriage as well as the sitting judge of the Dukes County District Court. They were charged with 36 counts of conspiracy and larceny of town funds. In a likely plea bargain, Linton turned state’s evidence and testified to writing 36 checks to Judge Eldridge in a conspiratorial money-laundering scheme. Nevertheless, Eldridge was ultimately acquitted.

Still in operation, the Lagoon Pond Well is said to be the oldest active pumping station in Massachusetts.