The victory evened the Vineyard record at 5-5 and atoned for a 35-6 loss to Bellingham in the 2000 Eastern Mass Division 5 Super Bowl. In that game, the lone Vineyard highlight belonged to Travis Baptiste, who scored on the opening kickoff.

On this night, Bellingham received the opening kickoff and drove to the Vineyard 15 behind a bruising ground game, chewing up 8:57 of clock. The Vineyard defense refused to break, however, and forced a turnover on downs.

The Vineyarders responded with an 85 yard drive, capped off by a 12-yard touchdown pass from Mike Mussell to Ben Clark with 23 seconds left in the first quarter. James Sashin booted the extra point to put M.V. up 7-0.

Mike Mazza thwarted the Blackhawks next drive with a leaping interception. The Vineyarders drove deep into Bellingham territory but did not score.

The Purple doubled their lead with 1:30 left in the second period after Ben Clark broke loose on the option for an 80-yard run down the left sideline. M.V. led 14-0 and nearly added another score before halftime. On the final possession of the half, the Vineyarders started at their own 20-yard line. First, Jacob Cardoza rumbled down the right sideline for 28 yards. Next, James Sashin lobbed a flea flicker to Cardoza, who made a spectacular diving catch at the Bellingham 15. The Vineyarders got off three more plays before time ran out but the Blackhawks snared Mussell’s final throw in the back of the endzone.

The Vineyarders continued to excel on both sides of the ball throughout the second half.

Dan Costello recovered a fumble at the Bellingham 48, 4:26 into the third quarter. Mike Mussell connected with James Sashin on passes of 25 and 10 yards before Jacob Cardoza bulled in from the two for the Vineyard’s third TD of the night. Sashin then split the uprights to make it 21-0.

Lucas DeBettencourt put the finishing touch on a sparkling Vineyard effort with a two-yard touchdown plunge late in the final period.

After an 0-4 start, the Vineyarders have pulled themselves back to .500.

“I’m very proud of the way the guys have rebounded,” Coach Herman said. “We’ve won four in a row now. We’re 5-5 with an opportunity next week to finish up with a winning season. That’s an awesome goal for us right now. We haven’t given up any points in the past two weeks. They [Bellingham] had a pretty good offense. The main thing we wanted to accomplish was to come out of this game healthy.”

And healthy the Vineyarders are heading into next Saturday’s clash with Nantucket in the 36th playing of the Island Cup.

Pending a game at West Bridgewater November 15, the Whalers are currently 7-2 under first year coach Brian Ryder and have a big, talented squad.

“It’s going to be exciting,” Coach Herman said. “We’re excited. They’re a good football team. They’ve been having a great year. They have a new coach this year, Brian Ryder, who played for Vito [legendary Nantucket coach Vito Capizzo]. He’s done a good job there. They’re big, physical and athletic, so I look forward to a very good football game.”

The 36th Island Cup kicks-off at 1:30 pm Saturday, November 22 at Dan McCarthy Field. The Vineyarders lead the Cup 18-17 and have won 10 straight over their island rivals, while Nantucket holds a 35-28-3 edge in the overall series dating back to 1953. The jayvee contest begins at 10:30 am. 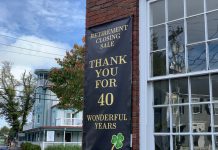 Sad and pathetic Democrat that can’t accept others opinions.