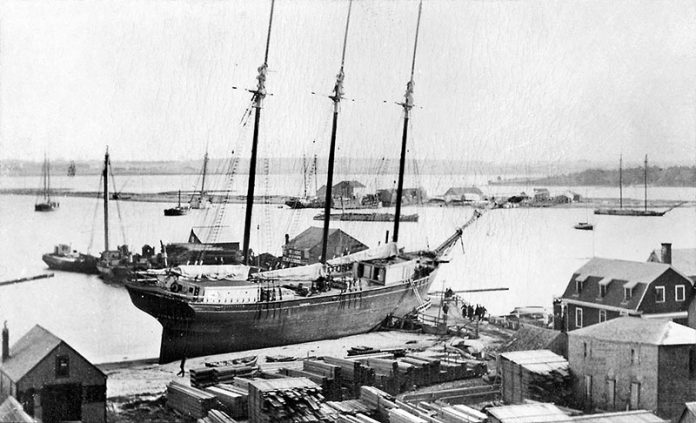 In the early morning hours of November 27, 1898, one of New England’s deadliest storms struck the Island with little warning. Known both as the Gale of 1898 and the Portland Gale, it was a blizzard of hurricane intensity. One hundred mile-per-hour winds buffeted Vineyard Haven with blinding snow and deadly wind chill in the predawn hours.

The British schooner Newburgh, returning from Staten Island to its homeport in Nova Scotia, was one of nearly 100 coasting vessels that sought shelter in Vineyard Haven’s harbor that night. But there was no shelter from this monstrous storm. The 500-ton schooner (nearly the mass of a modern Steamship Authority freight boat) parted both anchor chains and crashed into the upper portion of Union Wharf. Over the next few hours the heavy seas and high winds drove it steadily through the wharf, splintering it apart.

The Newburgh was one of the lucky ones: it suffered relatively little damage. Some 40 other vessels were sunk or wrecked in the harbor that night, and one schooner, loaded with lime, burned to its waterline. Many lives were lost, and half-frozen survivors were carried to the Marine Hospital for medical care. The Bethel (visible on the right) provided food and clothing for more than 100 shipwrecked sailors in the days that followed.

For five months the 136-foot Newburgh was firmly stuck here, making the town’s principal wharf impassable until necessity spawned an inventive solution: an adapted wharf with a sharp detour in the middle to direct traffic neatly around the ship’s bow. When spring arrived a tugboat was brought to free the stranded schooner, and by the beginning of May the Newburgh was finally floated and towed to New York, leaving an unusual-shaped wharf behind. The vast amount of sand stirred up by the tug’s propellor created a temporary beach that reached nearly to the end of the wharf.