Tom Shelby, who has trained dogs and their owners on Martha’s Vineyard and in New York City, answers readers’ questions about their problematic pooches. This week, the dogfather counsels he owner of a dog in heat.

I have two dogs, one male, 1.5 years, and one female, 10 months. The female has gone into heat this morning. The male is neutered, and I have a Pampers with a hole cut for her tail. What else should I do/expect?

I bet your male dog is a lot more excited about your female going into heat than you are. Heat averages about three weeks. Generally the bleeding turns pink by day 12, and stops by day 16, but they are not out of heat. It just means that she has ovulated, and it’s during this time that there are many unplanned breedings. Keep the diaper on her (indoors) for at least a couple of days after the discharges have stopped. You may also want to put a belly band on the male to prevent his “marking” indoors.

She will have a very strong and distinct smell that dogs from miles around can smell. Having used my dogs for search and rescue for 25 years, trust me when I tell you: Depending on the wind, dogs in Falmouth will be trying to take the ferry over to meet your alluring girl. When outside, do not take her off the leash. Period.

On average, they are breedable between the 12th and 18th day, known as the estrus period, but they can remain in heat until day 21. It is during the estrus period that you will see her “flagging,” cocking her tail to the side and backing her butt up to the male, or your leg, or whatever, saying, “I’m ready NOW!”

In terms of behavior, it’s not unusual to find both dogs humping each other, your leg, or anything humpable. Raging hormones may cause some minor behavioral presentations, and sometimes result in a “hysterical,” or false, pregnancy. It may occur whether or not she was mated. Symptoms usually begin four to nine weeks after the heat period, and may include mammary-gland enlargement with or without the production of milk, lethargy, and actually taking a toy and treating it like a newborn puppy. If that happens, let me know, and we’ll discuss it then.

If you have a yard with a six-foot fence, it’s still not good enough. An ardent suitor will get in or your dog will metamorphose into Houdini and escape to find the nearest “lover.” Outdoors she stays on leash!

Our 12-year-old Australian Shepherd barks at the front door, intimating that he would like us to open the door. We accommodate and he walks outside. Barely a minute passes before he is barking at the door again, intimating that he would like to return inside. We open the door, he comes inside. A few minutes pass and he is back barking at the door again. And so it goes. Other than spending the night opening and closing the door, is there anything else we can we do?

Dogs are pack animals and if they had their way the pack (family) would always stay together. Most dogs will present mild anxiety when during a walk a family member leaves the group (pack) to discard a soda can in a recycle bin 50 yards away, and show obvious satisfaction when the pack member rejoins the group.

Dogs also love attention and will do what they can to garner it, even at the expense of preferring negative attention to no attention. That’s why the puppy, rather than being ignored, will grab a sock only to have you chasing him, even if you’re angry about it.

Dogs are also tremendous creatures of habit. I remember a lady with a 7-year-old Spaniel mix who woke her up every night at 3 am to go out. “God, I’d love, for once to sleep through the whole night without having to let her out,” was what the lady said to me. I told her dogs are very habitual and this behavior is likely a carryover from her puppy housebreaking days, and the dog probably thinks it’s her obligation to continue her nocturnal outings. I suggested that she cuts off the water by 6:30 and when the dog awakens her at 3 am,  to tell her to be quiet and not get out of bed. The lady called me the next day to thank me and said, “She laid back down and sighed as though she was saying, ‘Thank God I don’t have to do this anymore.'” Creatures of habit.

So Kate, when you have the audacity to be doing something other than paying attention to your Aussie, he gets your attention by his barking at the door, but when you don’t go out with him he not only gets no attention, he needs to make the pack whole again. Quite a habitual dilemma for him and you.

First suggestion, install a “doggy door.” Problem solved. Or, teach him “Quiet!” At age 12 he’s certainly very attuned to your wants and dislikes. When he barks at the door tell him “Quiet!” sternly and ignore him. If he keeps barking try startling him by shaking a throw can a split second after you say “Quiet.” (An empty soda or beer can with a dozen pennies in it). If he still continues his pesky barking try throwing the can near him (not at him) as you say “Quiet!”

A good spritz with a stream of water from a spray bottle in conjunction with “Quiet” often works well. If he responds, you’ll find you just have to reach for the bottle and he’s done.

Don’t be surprised by a possible behavioral burst — meaning that his initial response to your not cooperating at the door might be to bark louder and longer. If you teach a mouse that when he pushes on a bar of a device to get a piece of cheese, and then remove the cheese, his initial response will be to push the bar harder and longer. “I always got cheese when I did this!”

If you’re willing to endure the acoustic trauma, you can just try ignoring the barking, or leave the room. Good luck with that.

Take a look at the bright side. If you ever move to Boston and decide to apply for a job as a doorman in a luxury building, your door opening experience will look great on your resume.

P.S.  If you do install a doggy door and have difficulty getting him to use it, let me know and I’ll tell you or show you how to get him doggy door savvy. It won’t be the first time. 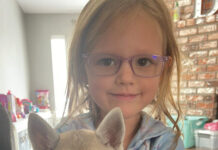