Red wine appears to have lied on its resume. Its appealing flavors and aromas can still be vouched for, as can the ways those qualities elevate a meal. The monetary values of so many of its great vintages aren’t in question either. However, one of its key medicinal claims, that because it contains the stilbenoid resveratrol, drinking it enhances cardiovascular health, now looks to be counterfactual.

Red wine has boasted since the early 1990’s that one of its chemical components, resveratrol, an antimicrobial that grapes and other plants produce, promoted cardiovascular health. The French really got behind red wine on this. 60 Minutes, in turn, got behind the French. Their 1991 segment, “The French Paradox”, showcased French society’s significant intake of red wine in conjunction with a diet rife with cheeses and other fatty foods. Despite such consumption choices, the French chalked up a markedly lower incidence of heart disease, especially when compared to Americans. On the coattails of that segment US sales of red wine soared.

Since the 60 Minutes segment, in which the work and theories of the now deceased medical researcher Serge Renaud were integral, waves of studies have sought to lend empirical credence to the conjectured benefits of resveratrol. Some animal studies yielded data suggesting resveratrol was indeed beneficial but in doses unachievable from red wine consumption unless one wished to be positively plastered day in and day out. In other words, you couldn’t safely consume enough red wine to reap resveratrol’s benefits. That angle wasn’t hyped. Mice being fed fatty diets along with resveratrol and living long (for mice) is the sort of slant that became popular and no doubt stoked an already hot market in resveratrol supplements while continuing to buoy consumption of red wine.

This May, a team of Johns Hopkins researchers, led by Dr. Richard D. Semba, published a study in JAMA (The Journal of the American Medical Association) Internal Medicine that torpedoed the belief dietary resveratrol bolsters health. In an exhaustive fifteen-year study of hundreds of elderly people in the Chianti region of Tuscany, the team found that those who consumed a resveratrol-heavy diet were no more ahead of the game in longevity, cardiovascular risk, or even cancer risk than those who consumed a resveratrol-weak diet. In addition to the demerits this handed down to red wine resveratrol, the findings of Dr. Semba and his team also applied to dark chocolate and berries, which can contain high levels of resveratrol too. These findings did not, however, apply to supplements.

In debunking a portion of the French paradox theory (that America championed), this American research team may have, in a certain light, unintentionally caused a tiny portion of the Italian populace to toss an anchor over the stern of global red wine sales. Hopefully that’s not the way the Italian wine industry sees it, let alone the French, American and Spanish industries. Thanks to Chinese consumers, it’s unlikely any of those industries could ever fear this study. According to an article the Guardian published early this year, though America leads the world in total wine sales (red, white, rose — you name it), China has surpassed France itself to become the world’s number one market for red wine. Last year the Chinese drank 1.86 billion bottles of red — not, it seems, due to its perceived health benefits but because the color of the beverage is associated with luck and happiness, whereas white, and therefore white wine, is associated with death and funerals.

Another reason this study probably hasn’t hampered red wine sales too much is that it hasn’t discredited the medical magic of red wine completely. What it has done is remove a Jenga-like piece from the health benefits red wine was presumed to confer without toppling the whole idea. According to Dr. Semba, other studies have indicated that in certain people, red wine still eases inflammation and also lends protection to the heart. His work simply rules out that those perks stem from resveratrol.

The take away? Red wine may have fibbed on its CV but its performance may still be good enough for you to keep it on the job. 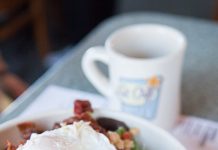 Dining at a Distance

Stella Salumeria brings the North End to the Island