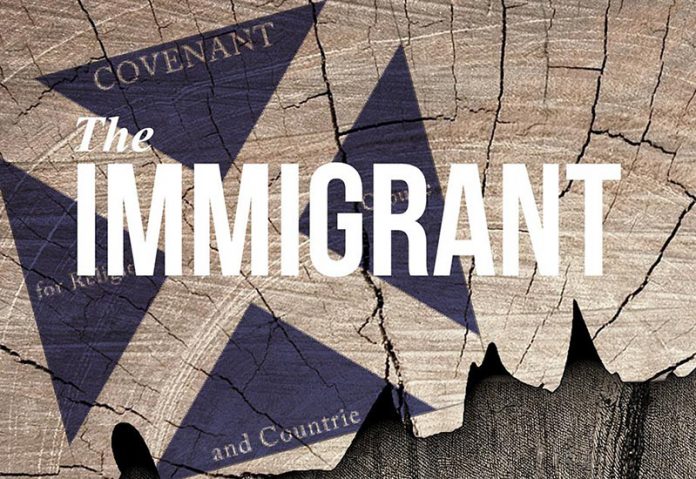 The Immigrant: One from my Four Legged Stool, a first novel by Alfred Woollacott III, from Myfourleggedstool Publishers, Oak Bluffs. 408 pages, paperback; $15.99. Available at Bunch of Grapes in Edgartown and online at Amazon.com.

Alfred Woollacott III, an Oak Bluffs resident, has written an extraordinary first novel. Set in the mid-17th century, the book chronicles his ancestor,  John Law, a 14-year-old boy caught up in a Scottish civil war, and the man he becomes as an English prisoner of war sold into indenture in the Massachusetts Bay Colony town of Concord.

The Immigrant is a terrific read because it succeeds on its literary merit: well-plotted, with substantive characters. Redolent with details of life on the frontier of the New World,  John Law’s travails put the reader in his hardscrabble life, contending with bigotry, penury, and the unforgiving New England climate in the days before diversity, electric blankets, and supermarkets.

The Immigrant is rooted in a 2002 post-retirement project Mr. Woollacott undertook after a career at global accounting firm KPMG. He spent years researching his family tree, and wrote a genealogy of his forebears. Then he decided, as he told The Times this week, “to put some leaves on the tree,” based on the rich store of information he had amassed.

“Furnished with facts, I began to fictionalize their lives,” Mr. Woollacott writes in the acknowledgments to The Immigrant. For that work, he signed up with John Hough Jr., Island author and writing coach. Mr. Hough has a dedication to fine detail in replicating past events and environments which gives his books a real-time feel for readers. The you-are-there quality is evident in Mr. Woollacott’s work here.

The actual John Law was a 14-year-old boy in Dunbar, a coastal town in southeast Scotland. Young Law cared for his widowed mother in that rural community, which also happened to be in the path of Oliver Cromwell’s British forces, intent on subduing rebel Covenanters, supporters of the Scots’ King Charles II.

Law is enlisted as a pikeman to face Cromwell’s army, is captured in the Scots’ defeat and was likely sent to the Massachusetts Bay Colony as an indentured servant. Law is greeted with disdain and bigotry by the self-righteous English colonists and is assigned grueling tasks as a wood chopper and collier, until he gets his big break as a shepherd tending sheep on the outskirts of Concord, where he meets the local Native Americans, who are leery but more accepting than the British colonists. The Puritans’ behavior toward the indentured Scots and the indigenous people would enrage a stone statue, and may provide us with insight into the reason they were shown the door by England a generation earlier.

Mr. Woollacott brings a taut spiritual dimension to The Immigrant. Law’s search for a father figure, his shame at not being able to care for his mother as he had promised his father, and his efforts to resolve his uncertain view of a just and merciful God, make a continuing and heartfelt dialogue as The Immigrant fights for his place and for his family in a strange land.

Mr. Woollacott has done painstaking research into the culture and laws of Puritan Massachusetts, particularly as they related to land ownership. We learn that some were ethical, but many were Bernie Madoff act-alikes.

The author expresses his story in his own view that our lives are similar to a four-legged stool, representing our maternal and paternal ancestors who shaped us. In the foreword, Mr. Woollacott asks, “Did our forebears experience what we are now experiencing? And if so, will we react as they once did?”

We get a sense of that in an opening chapter flash-forward when Reuben Law, John’s great-grandson, musters at the Concord bridge in 1775 to fight the British, thinking the same thoughts John Law thought 100 years ago at Dunbar.

Mr. Woollacott plans a trilogy based on his family’s doings. Those Laws and Woollacotts are a zesty bunch. Turns out that Naamah Carter, an early-19th century family aunt from Peterboro, N.H. and Reuben Law’s granddaughter, was one of Brigham Young’s 27 wives, and went to Utah to find a paradise that was not forthcoming.

Mr. Woollacott is currently looking for a publisher for his story. He reports that 60 publishers sent “no interest” letters in response to The Immigrant. Oops. Their bad. My guess is that none of them read it. My hunch is that Aunt Naamah will have suitors.

Mr. Woollacott will be reading from The Immigrant on Saturday, February 7 at 2 pm at the Oak Bluffs Library and on Saturday, March 7 at 4pm at the West Tisbury Library. Both events are free and open to the public.