John and Anna Alley were married in 1982 at the Field Gallery in West Tisbury.

How did you meet? Through association with Tom and Helen Maley.

Who proposed and how? Anna decided it would be a good idea, and John agreed.

Describe your Vineyard wedding: Wild and wonderful. Nearly 500 people attended. The church was reserved, as the weather was questionable, but not everyone would have fit. It was performed by the retired Dean of the Washington Cathedral, the Rev. Francis Sayre. There were five bridesmaids and five groomsmen. Anna’s sister was the maid of honor, and Tim Maley was the best man. We got through the ceremony and moved to the Agricultural Hall (now called the Grange Hall) and had a little time before the rain started. We provided the liquor, raw bar, clam chowder, and a huge cake. It was a major organizing venture. Joanie Jenkinson and her sister Angie Waldron organized the potluck dishes, and a caterer’s staff helped with serving, etc. It was an amazing event for us and hopefully for all who attended. Music was available for dancing upstairs, but it never happened. Too much fun downstairs with the food and people.

How many children did you have? Did any of them stay here? Two children. Nicole is now married and living in East Taunton, and has two children. She was an accountant for about five years, and her husband is a civil engineer who now has his own company, which she helps administer. Sam [John Samuel Alley Jr.] returned home after college, and worked at the Harbor View Hotel in the accounting department for the past 3½ years. He is now seeking a new position.

Do you both work? Yes, part-time.

Briefly describe your years together — the good, the bad, the wonderful … We have had an exciting and interesting life together. John was busy with local politics on many levels, which was frequently interesting. He also knew everyone and his brother, parents, and grandparents, which was also very interesting. Anna was busy with children, a lot of work on many nonprofit organizations, and then working part-time, first in the schools as a substitute school nurse, then at the Martha’s Vineyard Hospital working per diem as a nurse on the acute floor, and now at Vineyard Pediatrics. Anna also was elected to the Parks and Recreation Committee, and then to the School Committee. One might say we are interested in people and all that affects them. Our children are our most important work and interest.

Has the Vineyard been the best place to live your lives together? Yes.

Why? Anna would never have thought of living on the Vineyard until she met John. He would never think of living anywhere else. It turned out to be a great place to raise a family and to live. We were very lucky.

What advice might you offer to a couple about to be married? Much of life seems like the luck of the draw, but if a couple first and foremost love each other and want to be together, and are committed to make the marriage work, then hopefully it will. 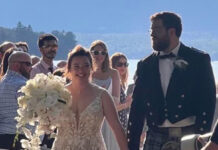