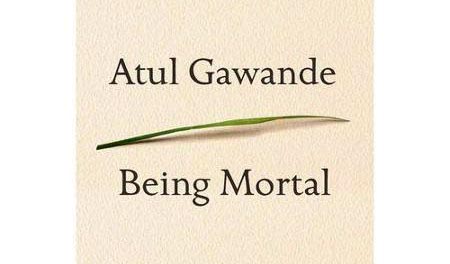 Being Mortal: Medicine and What Matters in the End by Atul Gawande. Metropolitan Books division of Henry Holt and Co. 282 ppg hardcover, $26. Available on-Island at Bunch of Grapes bookstore in Vineyard Haven and at local libraries.

Being Mortal is an important read for us about an unsettling question: What is the cure for being old?

Author Atul Gawande tells us that there is no cure, but that the practice of humanitarianism is the best medicine. And he tells us why that is the case, delivering his message in a lively prose style not generally found in medical literature.

Being Mortal is Mr. Gawande’s fourth book. His previous books have been bestsellers and prize-winning works about the role of medicine in societies around the world. He is a surgeon in Boston, a staff writer at the New Yorker magazine, teaches at Harvard Medical School, and operates two medically-based businesses, one a nonprofit.

Mr. Gawande’s accessible literary approach disarms and captivates. In the foreword to Being Mortal, the good doctor tells us that “the purpose of medical schooling was to teach how to save lives, not how to tend to their demise.” He posits that dying is part of living. What a friend of mine describes as “helping him when he was doing his dying” to describe her mate’s final journey mirrors Mr. Gawande’s perspective that we are — or ought to be — agents in our own dying process.

It is certain that we will all get to “do” dying, just as we raise children, have careers, or root for the Red Sox. The idea in this book is to make dying part of living.

Mr. Gawande has marshaled his personal experiences and training to cast a wide net over the subject of aging, in order to build a diagnosis of the current state of elderly affairs, beginning with an intriguing look at the role of elders and the changes in societal and family dynamics over the past century.

He describes the aging experience of his grandfather, a farmer in India who lived for 110 years, the final two decades in the bosom of a constant and attentive family in a culture where elders were revered for their wisdom and guidance in affairs great and small.

He notes that in the late 19th and early 20th century, U.S. marriages produced seven children on average, one of whom generally remained at home to care for elderly parents, a tradition called “Irish Social Security” in my urban community. That joke became dated in the second half of the past century, as families became smaller and children left not only the family home but also their country of origin, as Mr. Gawande’s father did.

Being Mortal includes the results of Mr. Gawande’s extensive social and medical research. For example, while the idea of elderly parents or one surviving spouse living alone can create uneasiness among families, he has found that living independently is not considered a burden by the elderly; they enjoy the freedom of independent living without family underfoot. Independent living is a goal for elders.

Mr. Gawande seems a fan of independent living, but notes that dependence is a reality for most of us at some point when the body wears out. He likens the body to a complex manufacturing plant equipped with backup systems in the event of function failure.

Human bodies, he notes, come with a variety of backups, including an extra lung, kidney, and gonad. But eventually, the machine wears down. Mr. Gawande places high value on quality of life, and makes no bones that nursing homes do not provide that value. He notes that safety and weight maintenance are nursing home priorities: “In almost none does anyone sit down with you and try to figure out what living a life really means to you under the circumstances, let alone help you make a home where that life becomes possible.”

Mr. Gawande believes that’s so because “we haven’t had the imagination for it.” Assisted-living facilities have proved an answer since they first opened in 1983 in Portland, Ore. This imaginative plan allowed residents to create a home and have freedom. Subsequent studies showed that resident health and functionality improved.

Mr. Gawande says, “A monumental transformation is occurring” but that while the old institutionalized version of aging and death is being rejected “… we’ve not yet established our new norm.”

“We are going through a societal learning curve, one person at a time. And that would include me, whether as a doctor or as simply a human being,” he writes.

On Thursday, March 26, at 3 pm, at the West Tisbury library Laura Murphy, R.N., will lead a discussion of Being Mortal: Medicine and What Matters In the End by Mr. Gawande. Copies of the book will be available at the front desk. The event is free and open to the public.