The “groupies” gather at the end of the counter, chattering about the last episode of their favorite reality show. A sales associate approaches and informs us that Liz is on her way; she’s running late. We’re gathered in folding chairs around the small, bright demo space at Le Roux Kitchen, in Vineyard Haven, mecca for the Island’s cooking gadgetarians. The woman in question is Liz Kane of Cakes by Liz, who’s been producing cakes and desserts on the Island for 23 years.

The sales associate distributes duplicated copies of the to-be-demoed recipe and dashes back to her perch behind the front counter. Everyone gushes about the prospect of making the coffee-rich coffee cake on the page. We engage, and I discover that this set of four women are regular attendees at Le Roux’s food demos. They’ve christened themselves “the groupies.” Four other women and one man round out the participants. We chat about the never-ending snow until Ms. Kane rushes in, out of breath and embarrassed.
She’s brought in a Cappuccino Coffee Cake [recipe follows], already made, to illustrate how to de-pan and glaze it. “Right now, it’s just a little bit warmer than room temperature,” she says. “It’s better to frost it now so you get the little drips.” She pours the icing — a combination of powdered sugar, strong coffee, espresso powder, and heavy cream — over the cake and, as predicted, it slides down the sides of the cake in gooey ribbons.

Soon the industrial-strength mixer is whirring, ingredients are flying, and Ms. Kane narrates as she goes. She apologizes that the ingredients are not completely at the room temperature as required. “I had to use a blowtorch on the butter,” she claims. This begins a discussion about whether the smallish torches sold by kitchen shops are better in the kitchen than the standard hardware-store models, and the best way to soften butter. We decide that the microwave tends to melt, rather than soften, but Ms. Kane recommends it for melting chocolate.

As she continues to mix the batter, she throws out tips. “If the recipe calls for sifted flour, sift before you measure,” she recommends.

She relates how she developed the recipe. “I used to buy this coffee extract, and it was never strong enough,” she recalls. “I used to add Folgers granulated to it. One day I was like, Why am I doing this? Why don’t I just make some espresso? That’s what I did. Now I add the granulated coffee to that, and that’s what I use for my base.” As the appliance continues to whisk flour and eggs, coffee and sour cream, she throws out advice about not going overboard on the mixing. This cake doesn’t require much, but “I make a sponge cake,” Ms. Kane says, “and you have to beat the crap out of it.”

When the batter is ready, Ms. Kane pours it into a greased bundt pan, alternating it with the cinnamon/sugar mixture. Into the oven it goes, and it’s time to taste the cake Ms. Kane iced at the start of the demo. It’s sliced, and wedges are passed down the line. Moist, kicky, and loaded with caffeine, the cake is a coffee-lover’s dream. Every third bite is a surprise of sweetness and cinnamon. Everyone oohs and ahhs their appreciation.

While Ms. Kane packs up and answers questions, participants gather their belongings and begin to drift to different parts of the store to use the 20-percent-off coupons we found on our seats. I stay and devour a second slice of cake.

Le Roux Kitchen frequently holds cooking and baking demos in their shop on Main Street in Vineyard Haven. Information can be found at their web site, lerouxkitchen.com, and in their ads in The Times.

Two weeks later, I’m downstairs at Edgartown library, learning to decorate a cake. Donna Blackburn, artist and assistant to the children’s librarian, oversees the Cake-of-the-Month Club, in which participants learn new decorating techniques on a single cake layer that they bring from home. Every month is a different theme — Valentine’s Day, Halloween, etc. This month, it’s St. Patrick’s Day, and we’re building a leprechaun’s face. Bad weather has narrowed participation down to myself and Suzanne Rollins of Edgartown — a regular in the club.

Admittedly, I’m not the best cake decorator (nor even in the top 10), but Ms. Blackburn’s instructions make it easy. We begin with a paper pattern she provides, and punch holes through it and into the cake to outline the face. We fill the center with palette knives mounded with pink icing, while Donna clips marshmallows into two equal rounds. We cover one with the pink frosting and attach it to the cake with toothpicks. That makes a nose. Two unadorned marshmallow halves make the eyes. So far, pretty easy.

Ms. Blackburn, an Edgartown resident, has been frosting cakes since her high school days. “My best friend’s mother used to make wedding cakes,” she recalls. “The trend in the ’70s was to load them down with roses.” The mother taught her and her friend to pipe petals onto flower nails to store for later use, and Ms. Blackburn participated in many of what she called “gab and rose sessions.”

So now we have lovely pink skin and large white eyes, but it doesn’t look like a leprechaun. Ms. Blackburn demonstrates the technique to pipe little stars — basic to defining and filling large spaces — and hands me a pastry bag filled with brown frosting. I follow her lead and a derby hat with an orange hatband results. I switch bags again, and long orange frosting strings make a very fluffy beard. Although my creation isn’t nearly as professional as Ms. Rollins’, it’s shaping up and I’m having fun.

After we use pastry bags fitted with writing tips to fill in the eyes, mouth, and eyebrows, Ms. Blackburn pokes a glittered shamrock decoration into the hats, and we’re done! It took less than an hour, and I’m kind of proud of my little guy. While Ms. Blackburn is carefully packaging up Ms. Rollins’ cake for the trip home, we reluctantly push a knife through my masterpiece and offer slices to the library patrons. Two boys in the children’s department are especially appreciative.

The Cake-of-the-Month Club is free to the public, but registration is required. Participants are asked to bring one 9-inch cake layer. The library supplies the rest. Dates and registration information can be found on the library’s web site, edgartownlibrary.org.

Sift together the following dry ingredients: flour, baking powder, baking soda, salt. Set aside.
Combine cinnamon and sugar (increase cinnamon to taste). Set aside.
Combine coffee granules and hot coffee to make a coffee paste. Set aside.
In a large mixing bowl, cream butter and sugar. Add vanilla and coffee paste. When mixture is nice and creamy, add eggs, one at a time. Add dry ingredients alternately with sour cream, starting and ending with the dry ingredients (⅓ dry, ½ cup sour cream, ⅓ dry, ½ cup sour cream, ⅓ dry).
Grease an eight-inch bundt pan. Alternately add layers of batter with cinnamon/sugar mixture, three times, ending with cinnamon/sugar over the top. Bake at 350° for 50 to 60 minutes (300° if using a convection oven).
Prepare espresso icing, combining sugar, coffee, espresso powder, and heavy cream to create a thick mixture. When cake is cooled (approximately 30 minutes), turn the cake upside down onto a serving plate, then drizzle icing all over the top. 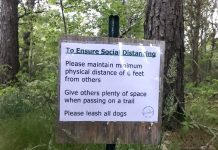